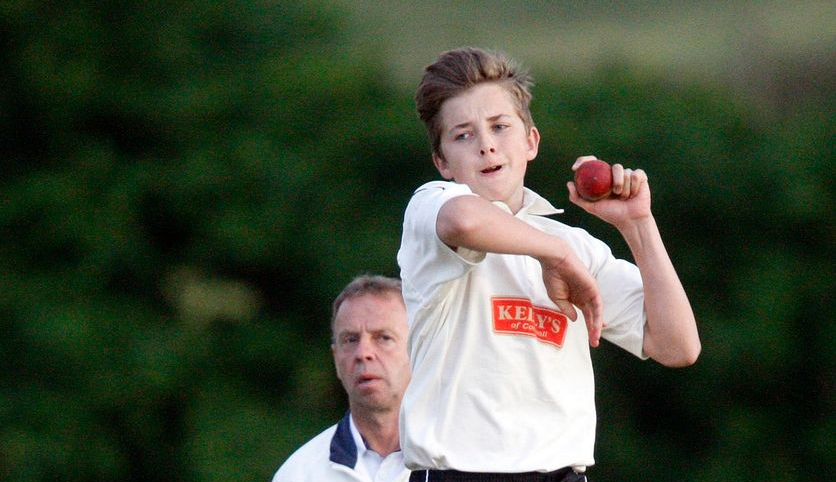 There might have been a lack of match action on a rain affected rearranged Matchday 1 but there was no lack of spectacle as Honley cut the deficit at the of the Premiership by five points by turning over unbeaten leaders Hoylandswaine. Moorlands and Thongsbridge beat the weather and also overpowered their visitors in the other two Premiership matches that survived the morning storms. Lascelles Hall put a abject run behind them by vanquishing leaders Barkisland in the Championship whereas Holmfirth’s impressive surge came abruptly to a halt. Denby surrendered their position at the top of the Conference to Marsden after they were beaten by the weather and Marsden overcame Upperthong.

All eyes were at Far End Lane in the rearranged opening day fixtures as leaders Hoylandswaine travelled to second placed Honley. In a 25 overs per side match, Honley won the toss and decided to bat first against their illustrious visitors who despite boasting an unbeaten league campaign so far, have suffered defeats in the Heavy Woollen Cup and Sykes Cup in the past fortnight. Simon Kelly (39) and Notts’ Will Fraine (40) gave their innings some substance with a good opening partnership of 85. Gurman Randhawa (4-46) eventually got to grips with the hosts to reduce the damage as Honley put up a imposing score of 154-7. A calm opening stand between Alex Lees (16) and Gharib Nawaz (23) gave no hint on what was to follow before the Honley bowlers scythed through the Hoylandswaine ranks to stun their opponents. Sam Denton (3-45) and Brett Randell (2-16) captured key wickets in the top order and they stepped aside to offer Lewis Kenworthy (4-37, featured image) centre stage as he decimated the lower order. Hoylandswaine soon saw the required run rate slip to ten an over and by then the win was out of reach with the visitors forced to cut their losses and settle for a single batting point on 125-9. 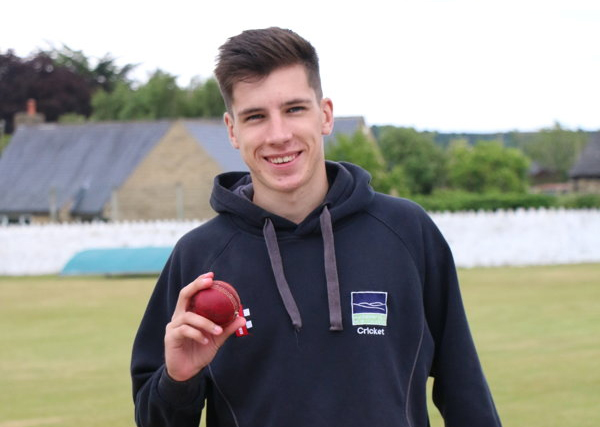 At Thongsbridge, a high-scoring reduced overs affair saw the hosts comfortably overcome Delph’s lofty 150-9 total in 22 overs. The visitors, coming in on the back of a five game unbeaten run, initially found the going awkward as they slumped to 35-5 inside ten overs. They were indebted to Wasim Qasim’s (50no) second half-century of the weekend to rebuild from their precarious position with Chris Tipper (27) also adding a useful contribution. Young quick bowler Ben Balmforth (4-49, pictured above) shined for the hosts during the first innings. Conversely,  Delph regretted some untidy bowling as opener Richard Marshall (72) ruthlessly punished too many off stump balls pitched at an inviting height allowing Thongsbridge to keep on top of the 6-per-over required rate. Wicketkeeper Jack Cassidy (39) helped finish the job as Thongsbridge’s 152-4 was reached with ten balls remaining to make certain another win in an already impressive season.

A stunning century by Nathan Rabnott lit up a 42-over derby match in Mirfield as neighbours Mirfield Parish Cavaliers made the short trip away to Moorlands to renew old rivalries. Rabnott (120) struck 15 fours and 5 sixes in his 102-ball innings with Michael Rounding (29) and Siraj Sajid (21) both adding useful inputs to Moorlands’ beefy 242-7 first innings score. Parish, whose position at the bottom deepened were lifted by a positive first wicket partnership as skipper Tim Orrell (37) and David Bolt (40) put on 95 runs together. That was as good as it got for Parish when Eddie Walmsley (5-26) and Michael Padgett (5-49) started trucking. The visitors lost six wickets for 15 runs which ended their interest and Bradley Drake’s 38 was a modest consolation as Parish were bowled out for 172.

Matches at Shepley (vs Kirkburton), Shelley (vs Golcar), Scholes (vs Armitage Bridge) and Broad Oak (vs Cawthorne) were all abandoned without a ball being bowled.

Elland muscled their way into third place with a salient conquest over the form team in the division; Holmfirth. Seb Allen’s side had enjoyed a seven match winning streak prior to the days fixtures but the visit of Elland brought them down to a brutal reality. Peter Dobson (3-17) and Alec Hodgeson (3-26) influenced proceedings with the ball, preventing the hosts from getting out of the traps. It wasn’t all plain sailing though with Holmfirth’s dangerous all-rounder Aizaz Khan always capable of inflicting terminal damage. They were rocked when Khan (4-13) removed the opening trio but Hodgson (30) held his nerve and secured the win to end Holmfirth’s impressive run.

Whilst Holmfirth’s run of victories abruptly ended, Lascelles Hall upset the form book themselves by turning over leaders Barkisland in their own back yard. Hall ended a run of six defeats by defending their 20 over score of 124-6 after good efforts by the Barkisland staff ensured they were one of only two Championship matches to survive the earlier deluge. The visitors solidified after floundering earlier on 46-4 with William Simpson (39) and captain Tom Wightman (27no) finding a good footing. Barkisland squandered a decent start as they made it to 55-2 with skipper Darren Robinson (19) and Luke Bridges (25) building well together. Zeeshan Khan (3-30) and Sheheryar Hassan (3-17) had other ideas though and once they made the breakthrough the hosts uncharacteristically fell apart losing their last eight wickets for only 30 runs. Barkisland’s 95ao was their lowest score so far this season.

Matches at Almondbury (vs Rastrick), Almondbury Wesleyans (vs Clayton West), Lepton Highlanders (vs Meltham) and Slaithwaite (vs Skelmanthorpe) were all washed out.

Marsden were the big winners by defeating the weather and chalking up their twelfth consecutive win at home to mid-table Upperthong to move four points clear of Denby at the top. They got in a 33 overs per side match and scored a healthy 196-6 first innings score with two scores in the sixties for Matty Butters (68) and Jack McNamara (64). Thomas Willians (3-70) stood out with the ball for the visitors. Upperthong wilted following a reasonable start to the reply with opener Willians (45) helping them get to 83-2. The visitors were stung by McNamara’s all round abilities as he took 4-29 to bowl them out for 156, but a point for their efforts ensured they’d not lose too much ground in the table.

Mirfield ended a wretched 11-defeat sequence with a much-needed victory at home to rock bottom Linthwaite who themselves are in poor shape having not won themselves since the middle of June. Sorry Linthwaite could only muster 116ao batting first as Beau McGuinness (6-23) scooped up a six wicket haul and only Usman Yusaf (66) displayed any steel. Mirfield’s win was sealed with several batting contributions, most notably from captain Adam Goldthorpe (26) and they reached 120-6 in reply with three overs to play.

The rest of the Conference fixtures were abandoned.