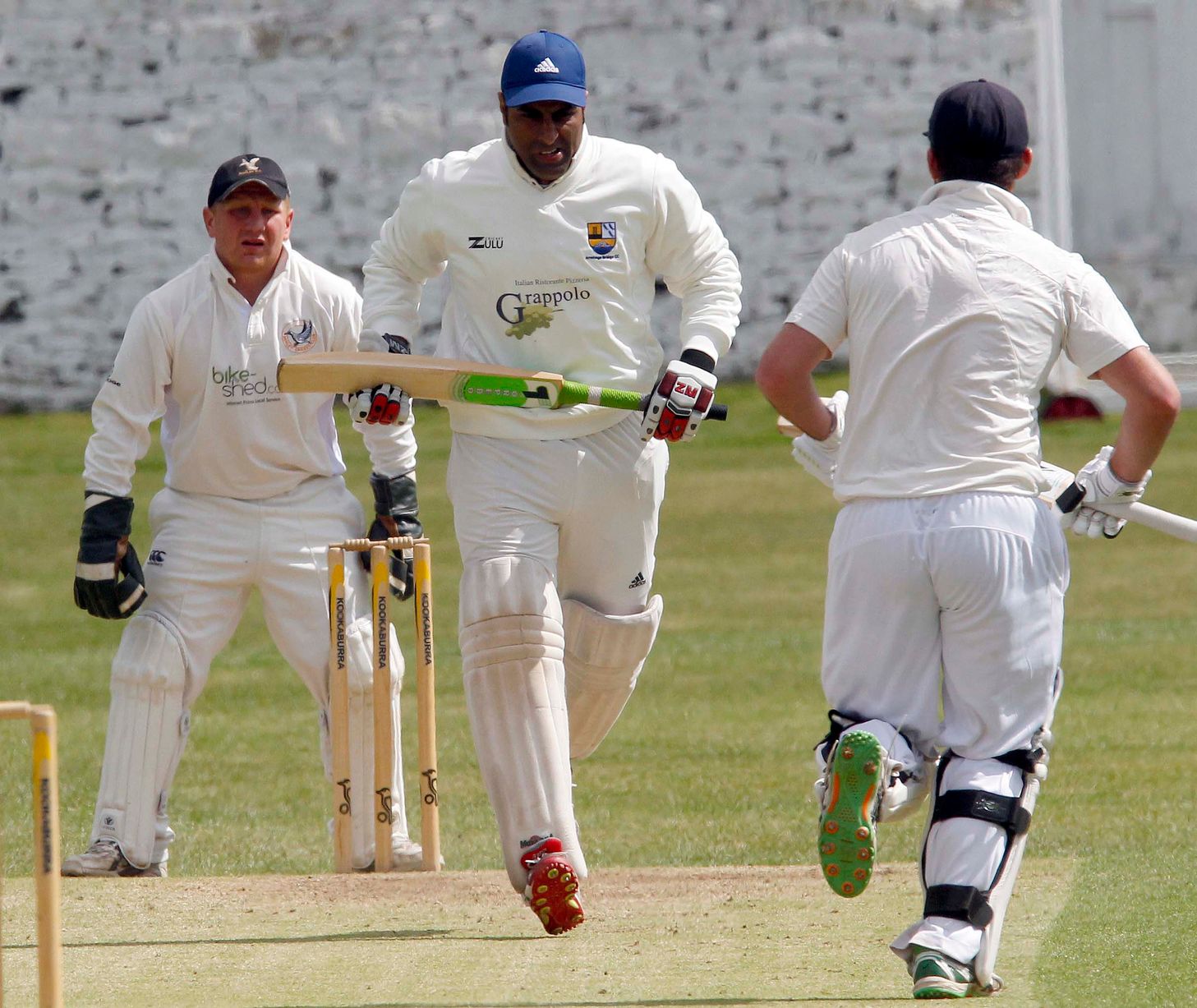 Powerful Shepley hit the straps in a cruise to apply pressure at the top of Group Orange as Golcar and Honley both enjoyed wins. But Group Yellow was where the gripping action happened with Ben Ellam firing with both bat and ball to earn his team Lascelles Hall a tie at home to Clayton West. Mirfield Parish Cavaliers were stunned by visiting Marsden who successfully chased down their muscular total thanks to a stunning pyrotechnic display by big-hitting Imran Malik (main picture). Skelmanthorpe are among the pacesetters in Group Red and their new signing Ryan Robinson once again showed why he’s always been a top performer after his batting power helped blow away Almondbury.

Lascelles Hall were grateful to a homegrown hero who dug them out of a sticky situation at the end of a pulsating match at home to Clayton West. Earlier, Ben Ellam had helped dust off the tail-end of Clayton West’s innings as they set 165-8 batting first for whom David Swann top scored with 46 off as many deliveries. Ellam took 2-27 off an expensive three overs but returned it with interest when it was his turn with bat in hand. When Ellam joined Hardeep Singh in the middle at 96-4, Hall had plenty to do to retrieve something from a game which had hung in the balance. Singh (25) fell on the first ball of the penultimate over, his team still requiring 18 runs to win but Ellam (37no) held his nerve to crack a couple of boundaries in the final 11 balls. He missed out getting the strike with two runs required from the final ball to win; skipper Tom Whiteman (4no) getting a single to leave the final scores level on 165-5.

Former Lightcliffe man Shan Dejrav made a big impression for his new team Mirfield Parish Cavaliers but Marsden pulled off an excellent run chase to deny Parish a win which would have kept them level at the top of the table with Elland. Devraj (106) followed up his 46 runs in the previous matchday with a stellar 96-ball showing, almost all along the ground with 17 fours and a single six. Visitors Marsden toiled throughout with the ball in hand as Parish set them a tough 223-6 from 30 overs. However Marsden - who were arguably the Championship’s surprise package in 2019 -  showed they could up their game to match anyone with a high scoring riposte. Matty Butters (59) put down a nice foundation by standing firm whilst keeping the scoreboard ticking but the real impetus began when former Armitage Bridge man Imran Malik (108no) started going. He punished the Parish bowlers by slamming seven fours and ten sixes in his 52 ball innings. With two overs to play Marsden still required some 41 runs to win. In the penultimate over, Malik stunned his namesake Rizwan Malik by clattering three maximums off his bowling along with a four. Into the final six balls, Bradley Drake suffered the same treatment after Sam Roberts sensibly handed the strike to on-fire centurion Malik who drove a further two sixes and two fours to win an amazing match with a ball remaining.

Greg Finn contributed for Elland as they won at home to Meltham.

Elland barely broke sweat in a handsome victory at home to Meltham. Greg Alexander’s five-fer didn’t give the visitors any reasonable wriggle room to apply pressure on the hosts with Jack Moulson (44) hitting the high notes for his team’s under-par 119-9. It was a welcome return for Elland wicketkeeper Greg Finn (27) who is back at Hullen Edge following a successful four season period at Bradford League outfit Woodlands. He set the tone for the reply which was won with ten overs remaining. Umer Abbas (47no) also impressed as Elland followed up with 120-4.

Harrison Quarmby sent visiting Shelley packing with a dazzling five wicket spell after they came crashing to defeat for the second time this season. Slaithwaite made an industrious 143ao thanks mainly to a solid middle-order partnership between Jack Bryson (39) and Alec Jakeman (36) with Cameron France (5-20) impressing with the ball for Shelley. Harvey Jones (82no) was at the heart of Shelley’s innings but he was unable to prevent defeat after Quarmby (5-43) pulled apart their reply by taking out most of the visitors' batting power as they slumped to 188ao.

Batsmen may have begun to get a grip on the potent bowling of Shepley’s Nasir Jamal but this has merely handed a platform for young bowling prodigy George Booth a chance to shine. Booth (3-17), who cut his teeth with over 70 wickets at 2XI level, took his sixth wicket of the campaign (in contrast to Jamal’s solitary one) in Shepley’s convincing win at home to Broad Oak. He dismantled Oak’s upper order with Luke Patel (2-36) and Ollie Davidson (2-26) chipping in as the visitors laboured to a 132ao first innings total. It wasn’t likely to prove too difficult to the powerful hosts with Patel (46no) anchoring their reply. Booth (31no) also showed he can be just as handy with another discipline as Shepley cantered home on 135-4 with over five overs remaining.

Golcar are steadily developing a shrewd streak as they made it back-to-back victories, taking care of visiting Scholes by inflicting on them their first loss of the season. Steve Whitwam (48) was once again at the centre of his team’s thrust, but he just missed out on a half century with Craig Ruscoe (37) offering solid support in Golcar’s 151-7 total. Scholes’ captain Bradley Birkhead has been in electric form with the bat but his team couldn’t weather an early barrage by opening bowler Will Hinchliffe (2-23). Miserly bowling by skipper Jack McNamara (2-4) turned the screw on the away side who then slipped into a rut. Nico Georgiou-Nicola (33no) carried his bat but could not add enough to challenge as Scholes’ reply withered to 98-7.

Something had to give between two teams boasting 100% records when Moorlands hosted Honley. The away side took the spoils with a destructive batting performance where Simon Kelly brought his personal total to a huge 242 runs in three appearances as he once again flayed a bowling attack with a brutal century. He scored 114no and Eddie Wilson notched a half-century in Honley’s total of 218. Moorlands weren’t in the hunt despite a good half-century by Eddie Walmsley and just one incident blotted the visitors copy book when Tim Taylor (snr) shelled a skied catch to deny Timmy Taylor a hattrick during the Moorlands innings.

News on Friday broke of a Barkisland player registering a positive test result for Covid-19 which caused the postponement of two fixtures; Armitage Bridge vs Barkisland and Thongsbridge vs Delph & Dobcross. Two of those teams; Armitage Bridge and Delph & Dobcross played a quickly-arranged friendly match which was won by Armitage Bridge by seven runs. Alex Blagborough (43), Cody Parr (40no) and Chris Dennison (47) all scored highly in the home team’s 188-3 total which their opponents Delph fell short of on 181-6, despite decent knocks from captain Alex Peters (42) and Mosun Hussain (46).

Ryan Robinson lit up Skelmanthorpe’s Group Red match away at Almondbury with a shimmering batting display. The vastly experienced Robinson, who has won virtually everything that has to be won in league cricket, slayed Almondbury with an unbeaten 76 runs off 35 balls (6 fours, 6 sixes) as Skelmanthorpe set 181-5. Richard Wimpenny (3-4) zeroed in on the Fernside men with ruthless precision as they were sent back for just 45 runs in reply.

Matt Henshaw was in belligerent mood as he slammed a century to help Almondbury Wesleyans to an impressive win at home to Rastrick.

Matt Henshaw sent 11 sixes sailing over the boundary in his majestic century as Almondbury Wesleyans enjoyed a rampant win at home to Rastrick. Nathan Kenworthy (49) was denied a half century as he and Henshaw (115) made their opponents toil with Wes making a daunting 282-8. Kenworthy (4-25) proved proficient with the ball as Rastrick were restricted to 145-9 with their best coming from Jack Pearson (39).

Nathan Rimmington impressed new club Hoylandswaine with a half century with the bat as they had too much for their hosts Holmfirth.

Hoylandswaine dominated in typical fashion at Holmfirth where another ton took centre stage. Former East Brierley man Shabir Rashid (102) and Durham CCC man Nathan Rimmington (50) hit landmark scores for their new team as Swaine totalled 249-6. Holmfirth frustrated and weren’t ready to roll over, though they weren’t likely to take on a meaty pursuit of the visitors total. Sam Butterworth (37) and Matt Gummerson (32no) happily absorbed the balls letting the Holmfirth reply freewheel to 106-3 after 30 overs.

The biggest score of the day came from Lepton Highlanders who smashed a massive 318-4 away at Denby. Sayed Salman hit an unbeaten 117 from only 60 balls sending 9 fours and 10 sixes off the pitch. Matt Dickenson (61) supported strongly with Jacob Mulhall (29) and Rob Dickenson (31) also contributing. To their credit, Denby also went big with John Hunter (57) and wicketkeeper George Davis (74no) both bagging half-centuries as Denby rounded on 231-5. Socially distanced spectators enjoying a total of 549 runs on a prolific afternoon.

Jon Lee’s half-ton was integral to Emley Clarence’s narrow win at home to Denby Dale. Lee (43) and Luke Taylor (47) combined well in Emley’s 200-9 total for which Harry Stubbs (4-22) fared best with the ball for Denby Dale. They were left short-changed on 194-7 despite Matty Rammell (52) scoring a fifty.

Delph & Dobcross 2XI skipper Daniel Jones took responsibility on his shoulders with a fine display that kept his team’s unbeaten record intact in a tough test at home to Cumberworth United. Jones (59no) came in with the home team under pressure on 93-6 and set about the Cumberworth bowling. Earlier the visitors scored 163-7 with Grant Jones (5-17) taking five wickets before joining his nephew in a supporting role with the bat as Delph responded with 166-6.

Elsewhere, Linthwaite’s Sajid Bashir put in a man-of-the-match performance by following up his 4-25 with 35 runs as the visitors successfully chased Mirfield’s 179ao on the last ball. Simon England and Harry Moore won a second match for Honley 2XI as they overcame Birkby Rose Hill in convincing fashion. The wily experience of England (36no) was complemented by Moore (4-30) as they defended a 138-7 total by bowling visiting Birkby out for 103. Brothers Tom and Ben Charlsworth had too much for Hall Bower who lost at Upperthong. Ben Charlesworth (37) starred with the bat in Upperthong’s 162-8 score before his sibling turned the tables on Hall Bower with 3-16 as the visitors closed on 134-7.