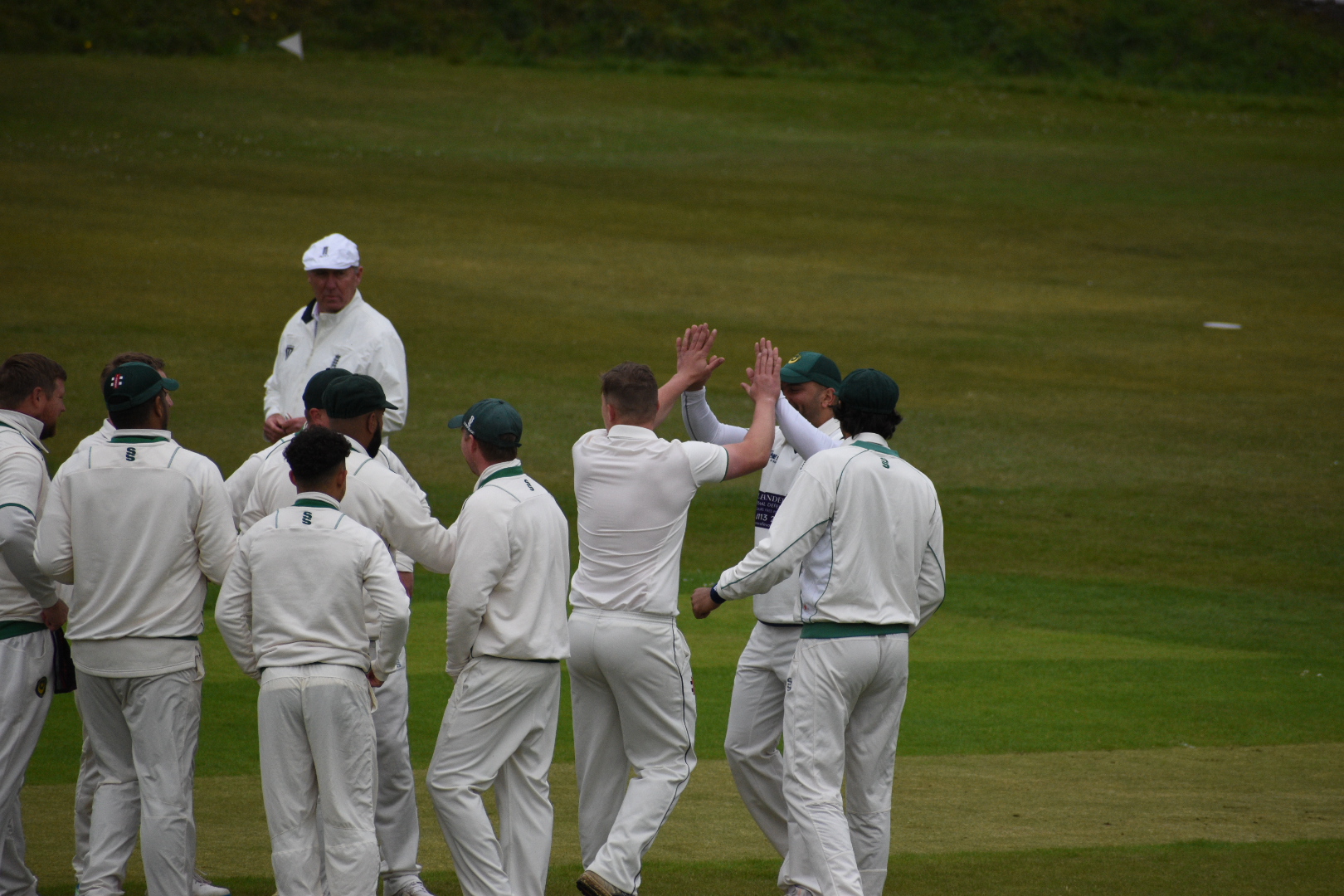 The Premiership table was radically turned upside down on an afternoon of surprises with four of the bottom seven teams all registering wins to boost their seasons. Slaithwaite finally shook the monkey off their back when they comfortably disposed of Kirkburton to celebrate their first win of 2021. Delph & Dobcross succeeded where champions Hoylandswaine failed by penetrating Golcar’s 100% home record in a match that went almost to the distance. Scholes’ put their season in full swing following their third win in three as they snubbed the division’s form team; Barkisland. It was just as riveting at the top of the table where Moorlands fired themselves back into contention by inflicting a first league defeat of the season on Premiership leaders Thongsbridge. Broad Oak suffered Hoylandswaine’s backlash in a big nine-wicket defeat, Shepley got back to winning ways with a steady home success to Armitage Bridge and Honley’s hefty first innings total was too many for Mirfield Parish Cavaliers to chase.

It’s been a long time coming but Slaithwaite finally opened their Premiership account with an impressive team performance to dismiss mid-table Kirkburton by 55 runs. Benn Thornton’s men got the result their performances have hinted at after a solid all-round display by Sohail Butt secured a first win of the season. The roots of their success lay from a solid foundation after Raheel Ahmed (69) got 2019’s Championship runners-up off to a breezy start. However they were made to battle hard by visiting Kirkburton with Alex Walker (14) and Butt (19no) mainstays in Slaithwaite’s push to 189ao. Long-serving bowler Tom Burkinshaw picked up his 18th wicket in a fruitful season so far but the day ended in disappointment following a bad afternoon with the bat for the away side. Alex Walker (2-27) will surely take a lot of the credit after he removed two of their opponents’ dangermen; Andy Smith and Roscoe Tahttil before they could get going. This left the bulk of the work to the rest but other than Ben Carrington (31) and ‘keeper Jonny Smith (21), they fell somewhat short once Butt had his way. The bowler took five wickets as he smashed through the middle order as Kirkburton capitulated under pressure. The end came swiftly once skipper Jonny Butterfield (17) had been caught by wicketkeeper Lewis Bradley with the visitors dismissed for 134.

Xander Selby led his Delph & Dobcross side to a hard-earned victory away at Golcar, inflicting on them a first home defeat of 2021 in their third straight win. The hosts shook off the loss of James Howson in the first over to reach 80-3 until the loss of three wickets for four runs blew their gameplan off course. Nathan Jones (2-46) came within a whisker of a hat trick and Xander Selby (3-40) claimed his 13th wicket of the campaign as Delph asserted control. Umer Yaqoob (3-46) returned strongly but Delph were perhaps guilty of not being ruthless enough as Craig Ruscoe (18), Jay Cyrus (26) and Will Hinchliffe (17) wagged the Golcar’s tail in their 161ao total. Delph’s innings carried familiar similarities as they too enjoyed a tranquil start by gliding effortlessly along to 81-1. However Jay Cyrus got a delivery to skid low to castle Delph’s untroubled opener Mosun Hussain (43). Golcar captain Jack McNamara (5-53) then seized an opportunity to turn the screw as his side forced errors from their opponents. The introduction of Lucas Selby (17), just as in last week’s victory over Shepley, provided Delph with the momentum they desperately needed. He hit two boundaries that eased the pressure at a critical moment to take them on the cusp of victory before he was caught out. Older brother Xander - by now hobbling with a thigh injury - along with Will Mott (6no) sealed a third league win. The visitors reply of 163-8 was achieved with one over remaining.

The fixture was poignantly attended by Judith France (above, in yellow); the widow of League president Roger France who passed away during the week, joining both teams in a minute’s silence ahead of the match.

The only remaining unbeaten record was finally broken as Moorlands came back strongly following last week's disappointment to beat leaders Thongsbridge. Siraj Sajid’s unbroken 88 was the lynchpin to Moorlands’ 190-8, scored tidily from 77 balls. James Rawlinson (36) provided a platform but the lofty visitors weren’t able to budge the former Kirkburton all-rounder despite the efforts of Zafar Iqbal (3-35). Alex Kemp’s title hopefuls lost their way in the second innings when key batsmen Rory France and Ben Raven-Hill fell when they were barely in double figures which put them behind the asking rate significantly. Harry Franklin (32) put in another impressive shift but willing partners were in scant supply. Sajid (3-37) removed Richard Marshall (22) and skipper Kemp (29) to end Thongsbridge’s interest as they finally succumbed to 150ao closing the gap between them and Moorlands to just five points in a congested top half.

Yaasir Imtiaz scored a half century and took three wickets as Scholes coasted to victory.

Scholes completed an assertive victory away at in-form Barkisland to ease their worries at the bottom of the table. Six wickets in total were shared between brothers Tom, Josh and Louis Brook in a first innings which the visitors had in full control to reduce Barkisland to 41-5. Jake Finch (21) and Cameron Van Rensburg (18) attempted to steer themselves out of the mire unsuccessfully but it was slow bowler Yaasar Imtiaz (3-24) who provided the ruthlessness that has destereted them too often during this campaign. In reply to Barkisland’s 127ao, Imtiaz (57) assembled his second half-century of the season as the visitors knocked it off in brisk fashion. Captain Brad Birkhead (39no) then took over as Scholes picked up their third league win of the season and moved six points clear of the drop zone. 129-3 (28 overs).

Will Fraine took a step back from County duty to set up Honley's win.

Yorkshire’s Will Fraine made a welcome return to Honley for his first start in club cricket of the season. Mirfield Parish Cavaliers’ toiled in the field as Fraine (45) and Simon Kelly (82) put on 101 runs for the first wicket. Timmy Taylor (53no) scored his third unbeaten fifty in four matches to pile more discomfort onto the visitors on a chastening afternoon where Honley finished on 223-5, twelve runs shy of their biggest total since the opening day. In fairness to the visitors, they fought wilfully to 67-1 but the loss of Jon Hellings (26) and opener Shan Devraj (25) changed the complexion. Taylor (5-43) claimed his first five wicket haul (and 16th wicket) of the season as he got stuck into the vulnerable visitors. Fellow spinner Lewis Kenworthy (3-54) helped him finish the job with Parish dismissed someway short on 147.

Hoylandswaine moved into second place and within touching distance of leaders Thongsbridge with a heavy defeat over struggling Broad Oak. The visitors’ cup exploits have now taken second stage and eyes now will be on their next league win in over a month as they were comprehensively outplayed at Swaine. The hosts brought in veteran bowler Ranjith Bandula-Don for his first league start since his last spell here between 2011 and 2013 and he showed he can still cut it at the top level with a five wicket haul. Alex Slack (44) made the first innings look more respectable as he lifted them from 97-7 to 166-9. Chris Holliday needed no invitation to take the game to the visitors as he smashed 88 runs from 55 balls to end the contest in rapid fashion. Sarjinder-Pal Singh (62no) took his tally over 300 runs with a run-a-ball innings as the two openers shared 153 runs for the first wicket. Hoylandswaine reached their target in half the allocation on 169-1 after 20 overs to keep them within striking distance at the top.

Five Star Jamal Has Shepley Back In Business Nasir Jamal made his best return of the season as Shepley hit back strongly following a disappointing weekend last time out. Second placed Armitage Bridge looked out-of-sorts in this overwhelming defeat as they struggled to overhaul Shepley’s industrious 195-9 total. Five Shepley batsmen made totals over 20 with skipper Greg Wood (37) the most successful. Six wickets were shared equally between Antipodeans Joshua Taylor (3-50) and Jaycub Curtling (3-59) but they couldn’t replicate their exploits with the bat during the reply. Curtling’s 21 at the top of the order was as good as it got as Nasir Jamal (5-26) turned up the heat on the visitors who lost seven wickets for 27 runs. Pakistan overseas player Numan Akbar (4-37) chalked up his 17th wicket in his first season here as Armitage Bridge struggled for momentum and were eventually bowled out for 83.