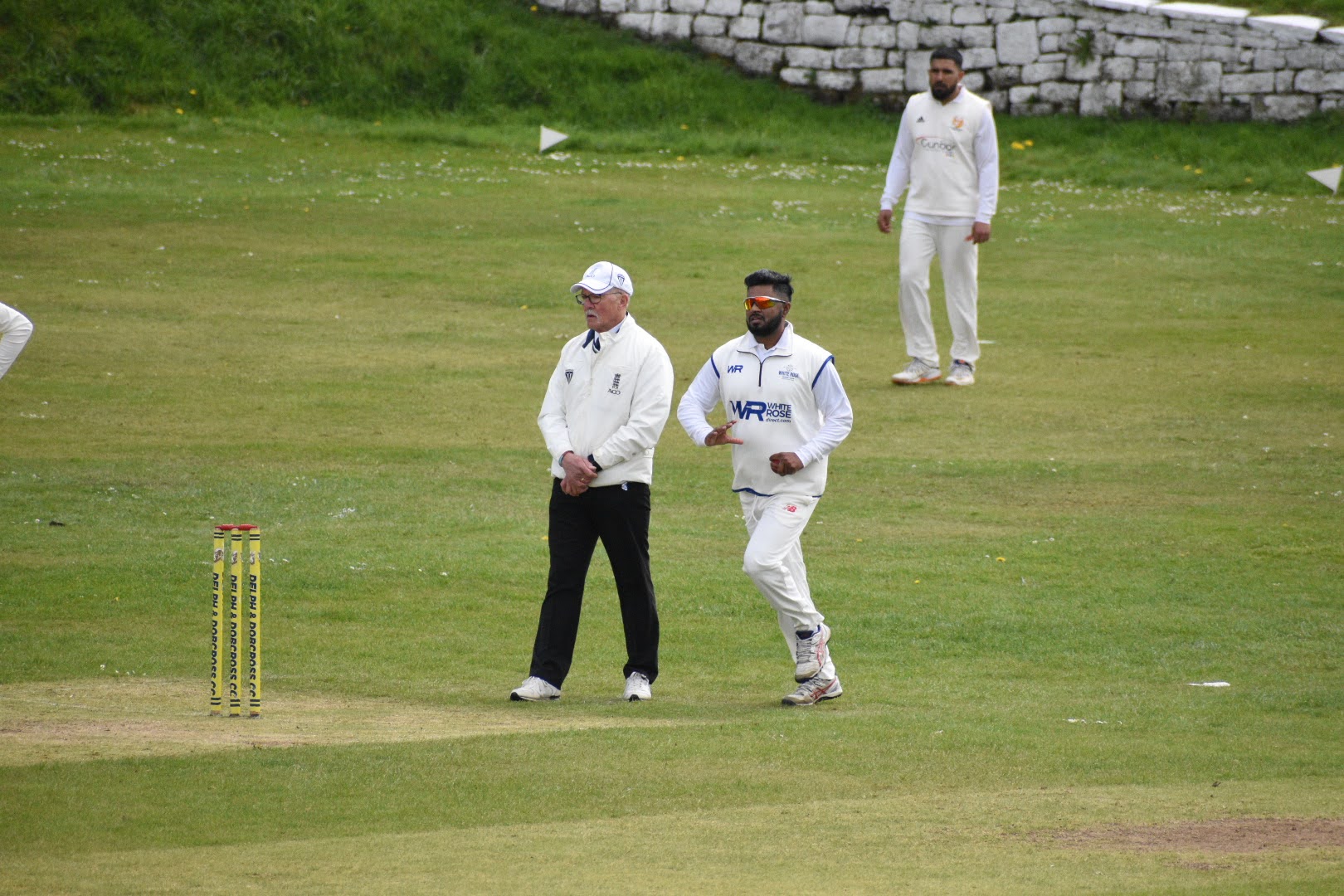 Nayyar Abbas (main image) arrived at Delph in the nick of time to spin his new side to their first win in 2022 which ensured all Premiership teams have a win under their belt after four matches. Skelmanthorpe gave Hoylandswaine a stiff test that the title holders swerved but only after one or two anxious moments. Honley’s Lewis Evans amassed the largest total of the day with a commanding century at home to Barkisland.

Delph & Dobcross had to battle hard to claim their first six points at home to Golcar in a uniquely low-scoring contest, dominated by good bowling. Delph’s new signing Nayyar Abbas (5-20) made an instant impact, controlling the first innings with 15 overs of canny leg-spin to unsettle the visitors. Adnan Ghani (2-13) was the perfect foil for Abbas’ slow deliveries and the 28-run partnership between last Golcar men Liam Rothery and Will Hinchliffe, who took them from 40-9 to 68ao may have been crucial on another day. Jay Cyrus (5-39) had Golcar in complete control, snaring Delph’s top order. Delph skipper Xander Selby will have been pleased by the strength of character shown in hostile circumstances with younger brother Lucas chipping in with a vital 23. However, with the Lancashire academy prospect castled by shrewd off-spinner Steve Whitwam, Xander Selby and 17-year old Isaac Jones dug in to nudge the home side over the line with two wickets remaining. Adam Rammell’s exploits with both bat and ball (pictured above) for Skelmanthorpe asked plenty of questions of top side Hoylandswaine, who did enough to answer them and move four points clear at the top. Rammell’s 26 boosted Shat’s total to 184ao but their inability to bat the full 50 overs prevented them putting up a score that could have caused an upset. Swaine’s Junaid Khan showed his class with the ball and chalked up his 24th wicket of the campaign already, as he posted season’s best figures of 6-33. The visitors’ 50-run second wicket partnership took the sting out of Skelmanthorpe somewhat and even though tireless bowlers Paul Cummins and Allan Greenwood chipped away with a couple of wickets each, Hoylandswaine marched on with a 185-7 reply.

The afternoon’s largest total came at Honley as their new overseas opening batsman Lewis Evans (pictured above) flayed Barkisland. Evans scored a fluent 134 from 130 balls where he rattled 18 boundaries. Eddie Wilson’s 48 helped the in-form hosts compile 267-7 despite Luke Bridge’s 3-61 for the away team. Star batsman Matty Weston hit his second half-century in an innings which began bright but soon began to run out of momentum. Evans’ room-mate, Australian pace man Jeremy Hackett took 4-41 and left-arm spinner Lewis Kenworthy claimed 3-60 as Honley tightened their grip and dismissed Barkisland for 207. Almondbury Wesleyans missed their opportunity to put more pressure on a side struggling for consistency as they were outmuscled by Thongsbridge. Rory France (56, pictured above) and Alex Kemp (47) were the key performers for the visitors but they were harried impressively by home bowlers Jack Atkinson (3-22), Jed Wiggins (4-45) and Matt Henshaw (3-69). Replying to Thongsbridge’s 202ao, Wesleyans were pegged back at varying occasions too. Will Binns lowered anchor for a determined 56 but the turning point came Pragam Sharma found his rhythm and the India spinner secured victory with 4-41 including two stumpings for the final two wickets as the hosts chased victory. Bryn Jenkins’ men were cut short on 187ao.

Craig Glover (pictured above) fired Shepley to their first home win of the season by emphatically dismantling visiting Kirkburton. Having started the season with strong intent, ‘Burton have shown a soft underbelly in recent matches after being bowled out cheaply at Broad Oak. Glover was in bullish  mood and took 7-36 as Shepley ran amok with the ball. Without Jonny Smith’s stubborn 31, Kirkburton’s first innings total would have been much lower than the 129ao they managed. Shepley openers Dan Wood (35) and Tom Chadwick (65no) did enough to secure a precious win and their 133-4 moved them above Johnny Butterfield’s men into fifth place.

James Rawlinson (pictured above) made a half century to earn Moorlands their second win of the season as they snubbed Broad Oak, inflicting on them a second consecutive defeat. He and Gharib Nawaz (77) set a 222-3 total batting first which was successfully defended thanks to Siraj Sajid. The talented all-rounder first hit 30no to set the win up before taking 5-35 as Oak were bowled out for 123.

Armitage Bridge weren’t able to capitalise on their fine win over Honley the previous week as they capitulated at Chapelgate against Scholes. Alex Blagborough’s 54 was a rare high point for the visitors who couldn’t contain Scholes’ Australian import Jack Shelley who scythed through them. Shelley returned 7-20 from 12 overs as Bridge were pummelled to 138ao, a dominant performance that was finished off with aplomb by Scholes’ opening batsmen Nico Georgiou-Nicola (60) and Yaasar Imtiaz.(57no) as they cruised to a 141-1 reply. Josh Brook’s side’s third victory of the season sees them stay in second place.