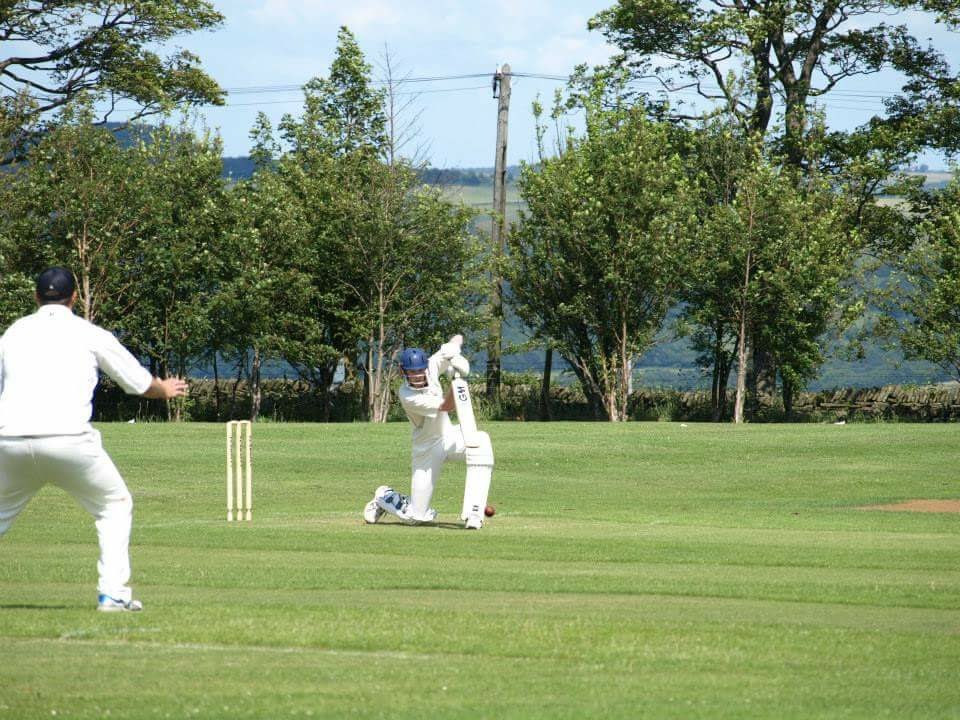 Tom and Ben Mighall combined together to concoct an intoxicating performance for Upperthong to knock Emley Clarence out in what was one of the shocks of the first round of the Sykes Cup. Premiership Scholes will play no further part after they yielded to a tricky tie away at Mirfield Parish Cavaliers and Denby pushed Barkisland to their limit, yet missed out in a tied thriller. Upperthong romped into Round Two of the Sykes Cup after two brothers put Emley in bother with the bat. In what is surely a first for the Huddersfield League, the Mighall brothers both scored a hefty ton each as Upperthong left their hosts trailing in their wake. Younger sibling, 19 year old Ben (pictured above), opened the batting with a measured display as he anchored in for 119 runs from 141 balls (16 fours, no sixes). 24 year old Tom (main image), Upperthong’s skipper, slammed a stunning 59-ball 101 where he sent 8 fours and 5 sixes beyond the ropes. There was still time for Will Kilner to sneak in with a salient 42 as the Conference outfit set their higher division opponents 294-3 to chase. Emley, who themselves are yet to taste victory following their 2021 promotion, had two half-centurions themselves in opener Jacob Bonner (56) and lower order batsman Callum Malin (53). Tom Mighall then went on to take 3-15 as Emley’s reply faded out at 186ao.

Two-time winners Scholes were at the sharp end of a butchering at Mirfield Parish’s amusingly-named ‘Pig Pen’ ground. Scholes let a commanding start sag badly after cruising to 83-1 before subsiding badly to 97-7 and then limped to 161ao. Parish’s Aussie import Brayden Brehaut then sent Scholes spinning out of the cup by taking 4-49 but Parish wobbled themselves at 14-3. Wicket-keeper Adam Spendelow, a close season signing from Bradshaw, dug himself in to provide stability at a moment that threatened to go off track. Spendelow’s 26no, scored off 81 balls turned out just as vital as Jon Hellings’ brisk 57 to nudge Parish home on 164-8.

Harry Finch’s afternoon for Barkisland had something of a curate’s egg feel about it, but was enough to put his club into the hat for Round Two. Finch put in a sparkling performance with the bat by carrying his bat for 70, but faced an awkward last over with the ball as Championship side Denby tied, yet missed out by conceding more wickets. Chasing the home side’s 189-8, Kaleel Ahmed (43) and Faisal Javed (33) put Denby in charge but Barkisland removed both to swing the balance in their favour. With John Hunter moving past a half-century and into the last over needing 17 to win of Finch’s over, Denby were eying a big finish. A couple of boundaries by Hunter put pressure on the bowler, before he ran partner Paul Goodman out. However Hunter then hit a six to leave Denby needing just two runs from the final two balls. A single run followed before Hunter was run out on the final delivery to conclude a breathtaking match.

Elland’s season went from bad to worse after they succumbed to lower division opposition at home to Thurstonland. Jimmy Kain took 4-20 in a first innings that the away side dominated by dismissing the record Sykes Cup winners for 112. Kain then guided Thurstonland into the second round with 30no as they cruised to their target on 114-4.

The only all-Premiership clash saw Kirkburton soundly beaten at Broad Oak. Dismissed for 80, Kirkburton showed little resistance to Charlie Roebuck who claimed 5-13 in an innings that fell apart at the seams for the visitors. Oak lost five wickets knocking off the lowly target but Ben Lowden’s 35no was enough for the hosts to progress. A couple of top flight sides had uncomfortable moments but managed to hold off their Championship counterparts. Delph & Dobcros lost two wickets in the first over when going after Clayton West’s competitive 241-7. Tall Indian professional Ashay Palkar (3-34) was denied a hattrick but a classy century by Mosun Hussain (127no, pictured above) and 62 from Delph’s homegrown prospect Harry Partington guided the 2017 winners through. Shepley weren’t at the races after being surprisingly bowled out for just 94 at home to Lascelles Hall with Tom Addy (5-17) the chief tormentor. The visitors were themselves obliterated and squandered a good opportunity on 37-2 to finish all out for 63 thanks to Yorkshire Academy’s Josh Hoyle (6-15). Jacob Mulhall hit 68 for Lepton Highlanders but Almondbury Wes used up eight wickets overhauling Lepton’s 135ao target and Dan Moorhouse’s 41no, to add to his 2-20, was crucial.

Premiership teams Honley, Hoylandswaine, Moorlands and Skelmanthorpe all forged routine paths into the second round. Jeremy Hackett and Timmy Taylor took three wickets each in Honley’s win away at Marsden. Conference high-flyers Linthwaite were downed away at Hoylandswaine thanks to Junaid Khan (3-18) and Chris Holliday (3-19, pictured above). Sykes Cup holders Moorlands gave eight bowlers a run out at Cumberworth United with Nadim Hussain (3-29) and James Stansfield (3-26) faring the best and Skelmanthorpe’s Jack Newby (75) followed up his impeccable century the day before at Delph in impressive fashion as they ousted visitors Slaithwaite.

Elsewhere, Thongsbridge made hay at Meltham by totalling 245-9, built around Indian batsman Pragam Sharma’s 69. Sharma then took 4-19 in Meltham’s 182ao. Golcar had a worry-free win in getting past Holmfirth as James Howson’s 63 (pictured above) and James North (60no) saw the hosts reply with 171-3 to Homfirth’s 167-8. Hall Bower were undone by Chris Dennison (4-6) and Sohail Butt (4-13) who rolled them over for 98 and knocked off the total for the loss of four wickets. Shelley emerged winners at home to fellow Championship side Rastrick as they responded with 215-7 to the visitors 212ao total. Dino Baker’s 3-41 and 30 with the bat was the difference despite Jacob Waterson continuing his brilliant form by making 87 for Rastrick.