The long hot summer continued on matchday 14 on an all-Premiership Sunday with leaders Hoylandswaine negotiating another hurdle on their march towards a second successive Byrom Shield title. Honley registered an easy triumph as they made Cawthorne pay and life for Mirfield Parish Cavaliers didn’t get any easier after they were on the wrong end of a bruising Tom Brook century in another comprehensive defeat, this time away at Scholes.

Life has a knack of kicking you in the teeth when you’re down and for Mirfield Parish Cavaliers, a tough lesson was handed out by Scholes at Chapelgate. Only a day after licking their wounds following a 400+ score dished out by Thongsbridge, they travelled to Scholes and were asked to field first again by their hosts. Despite an early breakthrough, ominous signs were aplenty as James Noble (44) set the platform for what was to follow. Tom Brook (100) then bashed a brutal run-a-ball century and with him out at 238-6, Bradley Birkhead (38) and Mark Floyd (44) heaped more anguish on the visiting bowlers, painfully missing their talismanic overseas Nazir Hussain who misses the rest of their season with a cruciate injury. Scholes settled on 314-9 with Daniel Hope (3-67) submitting the biggest return in a tiring bowling unit. Parish wicketkeeper Muhammad Ali (55) took his own tally to over 500 runs for the season with a painstaking 61-ball contribution but Parish weren’t in the hunt in reply as 2 wickets apiece were shared between Tom Brook (2-51), brother Josh (2-51 too!) and Tom Chadwick (2-40). Yaasar Imtiaz (4-57) returned the days best figures as Mirfield Parish Cavaliers could only muster 203ao in reply off 47 overs.

Armitage Bridge enjoyed a faultless weekend and registered their second home win in two matches at home to out-of-sorts Kirkburton. The hosts made 250-5 batting first as Jaycub Curtling followed up the previous day’s century with 70 off 90 balls. Robin Broom (69no) also laid siege to the Kirkburton bowlers who struggled to make telling breakthroughs. Kirkburton made a reasonable start in reply with openers Andrew Smith (35) and Jonathan Butterfield (45) combined well. However their challenge faded away in the heat once Daniel Moorhouse (4-36) took charge who reached 34 wickets of the season so far as Kirkburton were bowled out for 174. 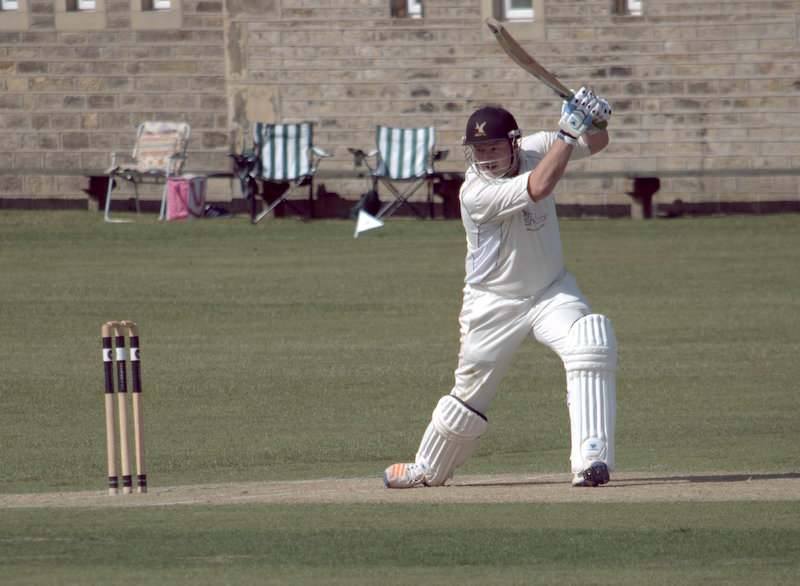 Simon Kelly savagely led the way for second placed Honley as struggling Cawthorne were euthanized in a very one-sided Far End Lane tussle. Kelly (70, pictured above) along with Ryan Robinson (32), Lewis Kenworthy (67) and Brett Randell (49) laid on a daunting score of 260-6 as visitors Cawthorne struggled to cope with their hosts, determined on chipping away at the 11 point gap between them and top-of-the-table Hoylandswaine. Liam Wiles, deputising as captain in the absence of Chris Walmsley had his work cut out in the reply and were kept in check by the Honley bowlers, especially Kenworthy (4-21) who completed a notable man of the match performance. The visitors eventually being dismissed for 117 off 33 overs.

Moorlands couldn’t handle the heat dished out by the reigning champions who continue to blaze their way towards a second successive title. This time Swaine were missing Alex Lees, recalled by Yorkshire but he wasn’t required with Moorlands being dismissed for an under-par score of 140 thanks to a destructive five wicket spell by spinner Gurman Randhawa (5-33). Captain SP Singh (59no) and wicketkeeper Max Joice (48) helped Hoylandswaine reach 141-3 without breaking too much sweat on yet another sweltering afternoon.

After conceding 438 runs the previous day, Shelley will have been seemingly relieved after winning the toss at Thongsbridge who themselves helped themselves to the current team Premiership batting record on the same day. However the visitors fortunes remained the same and they lost in similarly one-sided circumstances which leaves them still looking over their shoulder at the bottom two. Shelley battled their way to 196ao with the failure to convert half-centuries yet again dogging the visiting team. Wicketkeeper / captain Harvey Jones (44), Ranjith Bandula-Don (41) and Josh Scott (41) all missed valuable opportunities to put pressure on the hosts as Tom Raven-Hill (3-33) took the best bowling figures. Thongsbridge perhaps scored less freely than the previous day but Jack Cassidy (73) helped guide them to a comfortable victory inside 40 overs as Thongsbridge reached 197-6.

Golcar’s woes rumbled on in a loss away at Shepley who are now unbeaten in five. Batting first, Steve Whitwam’s side could only make 137ao with Samuel Mills (64) top scoring for the visitors and Danny Glover (4-37) finding his mojo with the ball. Despite taking the early wicket of overseas John Anderson (2), the result was never in doubt and Shepley cantered to victory with Dan Wood (62) and Tom Denton (30) securing another confidence-boosting triumph ahead of a crunch Sykes Cup semi-final in two weeks time. 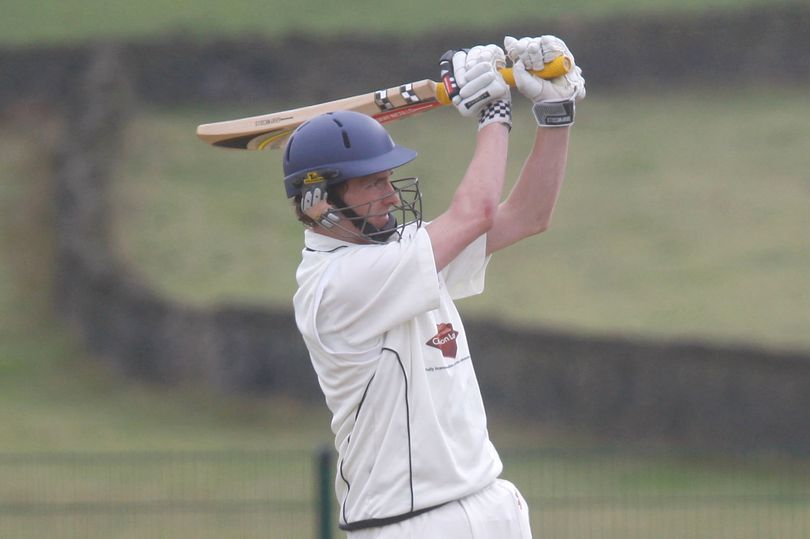 Another side who have endured suffering this season are Delph & Dobcross and they were brought back to earth away to a team who currently possess an Indian sign over the Lancashire-based club; Broad Oak. The hosts bounced back from Saturday’s defeat in fine style by wracking up an imposing total of 271-7 with solid contributions throughout the order including two half-centuries for former Delph player Charlie Roebuck (53, pictured above) and Alex Slack (50no). Only one Broad Oak player failed to reach double figures as Delph misfired spectacularly with the ball with only part-time spinner Chris Tipper (3-34) offering any resistance. At the top of the order, Mosun Hussain (71) finally started playing himself into form but batting proved to be difficult on a bone-dry wicket which started to break up as the innings progressed. Captain Jack Hargreaves (3-43) helped pile on scoreboard pressure for the visitors who saw out the innings in a death-by-paper-cuts process, despite a belligerent knock by Umer Yaqoob (44). Delph, distinctly second-best on the day, used up their fifty overs, ending on 175-8.