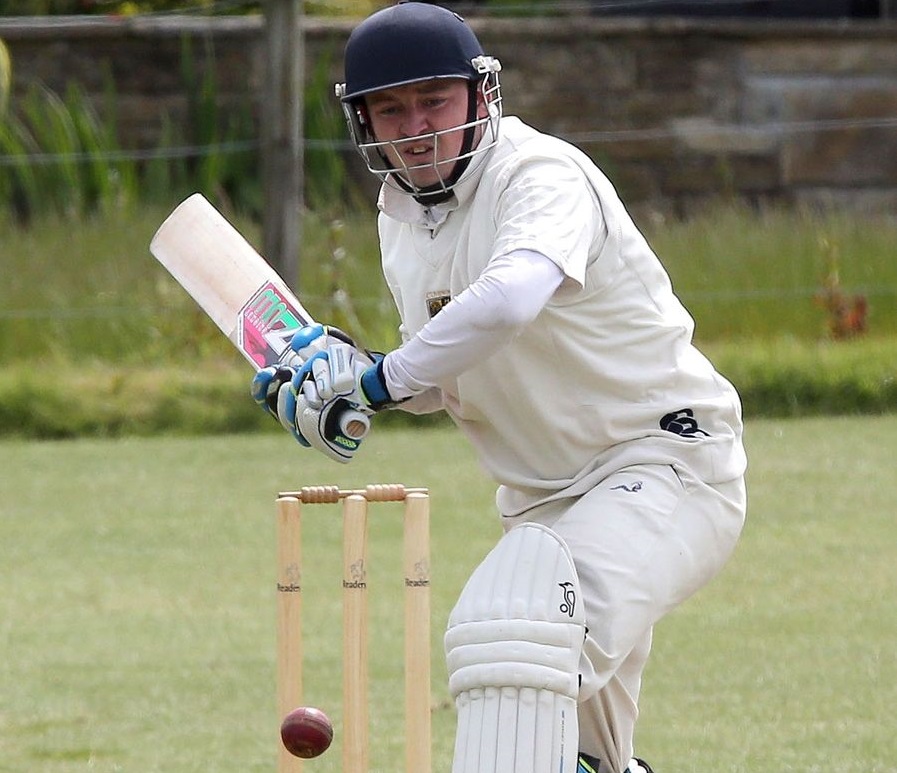 The elements went a long way to decide some of the remaining loose ends of the season on a showery afternoon across the region. No Premiership matches were able to see a conclusion but in the Championship, the leaders Barkisland, secured promotion with a match to spare and close behind them, Almondbury Wesleyans muscled in to be hot favorites to follow them into the top division after easing through a crucial rain-affected match away at Clayton West. In the Conference, promotion issues will be decided on the final day after Cumberworth United in third place took advantage of the top two’s inactivity to further congest the battle at the top.

Featured Image: Matt Henshaw's belligerent 77 for Almondbury Wesleyans fired the Kaye Lane side to the cusp of promotion with only one match left

A mouthwatering contest between title winners Hoylandswaine and second placed Honley was inconveniently cut short midway through the first innings. Hoylandswaine may have been the more frustrated side after looking set to put up another muscular total against a Honley team with several regular names missing from their roster. Gharib Nawaz (37) and captain Sarjinder Pal Singh (83no) loaded up with 75 for the first wicket before Max Joice (35) added another useful contribution. However at 212-5 the rains fell to end the match prematurely with 14 overs left to play.

Four wickets each for Cawthorne bowlers Luke Robinson (4-44) and Jacob Deavin-Baker (4-51) bookended the Barnsley-based outfit’s home campaign in their penultimate Huddersfield Cricket League match of the season at home to Broad Oak. The visitors grafted their way to 216ao with the aforementioned bowlers hampering Oak’s progress. Charlie Roebuck rattled off a typically swift 32 which was added to by captain Jack Hargreaves (38). Sean Mee (61) and Kyran Dill (31) lay down some solid middle-order runs which pushed them up to a competitive total and had the weather not intervened over the course of the tea interval, a good match may have played out in the second innings.

Above: Andrew Fortis, Moorlands captain scored an unbeaten half century during their rained off match against local rivals Mirfield Parish Cavaliers.

A local Mirfield derby with mid-table Moorlands visiting their relegated Neighbours Mirfield Parish Cavaliers reaches as far as 15 overs before the elements curtailed play. A 41-ball half-century from returning Moorlands captain Andrew Fortis (51no) appeared to have paved a good start for the visitors with bowlers Tom Fretwell and Daniel Hope taking a wicket apiece for Parish. Moorlands were 88-2 when the captains shook hands on a draw.

Matches at Delph & Dobcross (vs Thongsbridge), Golcar (vs Shelley), Kirkburton (vs Shepley) and Armitage Bridge (vs Scholes) were all abandoned before a ball was bowled.

Just 12 months since Barkisland had their five year stay in the Premiership ended, the Calderdale-based club made an instant return after inactivity elsewhere meant their nine point cushion over third placed Rastrick couldn’t be overhauled. Lascelles Hall reached 91-2 at the point of abandonment with George Sommerville scoring 49no with bowlers Jamie Sykes and Darren Robinson taking a wicket each for Barkisland. Robinson’s side, Sykes Cup winners as recently as 2015, will take their place in the 2019 Premiership regardless of the result of their final match of the season.

Sheer drama encapsulated spectators as second placed Almondbury Wesleyans made a crucial journey to third-placed Clayton West in a pulsating contest that went a long way to deciding the final promotion berth. Hosts Clayton West set a substantial first innings score of 229-6. New Zealander Phil Tunnicliffe (34), who this week collected the Overseas player of the season award, got his side off to a reasonable start which was further boosted by an input by David Swann (38). Alex Rank (86no) added an impetus to the hosts innings with a fine 116-ball measured display containing 13 fours and 2 sixes. For Wesleyans, Freddie Walker (3-39) - himself a contender for the overseas award - led his side with the ball in a 15 over spell that never let their rivals out of their crosshairs. With rain in the air and several disruptions already eating into the time remaining, Will Binns’ visitors went about the reply with a sense of urgency. Their proactive strategy almost came a cropper after they were reduced to 38-3 inside five overs. However Walker (24) and all-rounder Matt Henshaw (77no) laid waste to the Clayton West bowling attack with a ferocious assault. Henshaw bludgeoned 4 fours and 9 sixes in a seering 32-ball showing which stunned the home side. The home side’s target was then adjusted to 137 off 30 overs but by the time bad light ended the match, Wesleyans were in a commanding 142-4 position and secured a vital victory. Even a solitary point in a defeat next week will ensure Almondbury Wesleyans will be rewarded with top flight cricket in the 2019 season.

The final home match of a troubling season for Skelmanthorpe was abandoned after 38 overs against visitors Slaithwaite who resided just four points above them in the table. Skelmanthorpe, racked with absences, ambled their way to 169-9 after Sohail Butt (4-57) and skipper Alex Walker (3-52) maintained control for the T20 Shield winners. The seasoned Richard Wimpenny (40no) top scored whilst there were contributions from Jordan Greaves (28), Josh Megson (24) and Luke Webster (24) before play was ended.

No play was possible at Meltham (vs Lepton Highlanders), Rastrick (vs Almondbury) and Elland (vs Holmfirth).

Cumberworth United lined up a final day winner takes all affair away at Marsden by edging past visitors Thurstonland by benefit of the rain rule. A super century from opening batsmen George Parkes (111) put Cumberworth on course for a weighty first innings total after winning the toss and batting first. His patient 152-ball knock contained 19 fours and 1 six and set an imposing tone on the match. Thurstonland, to their credit battled back with Jordan Thackray (3-77) taking quick wickets with Cumberworth skipper Matthew Dooley taking the weather into account by declaring on 230-6 with two overs left. Reid Somani proved to be a thorn in the side of the visitors by taking wickets inbetween rain interventions. Overseas Somani (4-34) took his 69th wicket of a rewarding campaign as Thurstonland fell short of the revised 157 target on 134-7. A half century from Josh Booth (59) wasn’t enough to secure a victory which would have handed promotion to top two Denby and Marsden.

The only other match to beat the elements was a swift affair at Kirkheaton as they crushed Emley Clarence. The visitors were bowled out for 97 with Thomas Atkinson (4-28) making the biggest impression for Kirkheaton who are bidding to end the season well. Had it not been for a bullish half-century from Emley overseas Shannon Clarke (66) the contest may have been over far quicker. A reduced target of 65 from 28 overs was reformatted which Kirkheaton reached with little fuss scoring 66-2 in slightly more than 15 overs. Daniel Rushworth (24) and Naveed Akram (25no) both on point in the win for the mid-table hosts.

Play at Hall Bower (vs Denby Dale), Upperthong (vs Marsden), Linthwaite (vs Mirfield) and Birkby Rose Hill (vs Denby) was cancelled before the start. Denby can secure the title, and their place in the 2019 Championship, with victory at home to Upperthong on the final match.

We hope you have enjoyed a peaceful seasonal break and enjoyed a Happy New Year as we look forward to 2021. We understand business may be...

Merry Christmas From The Committee

After a challenging and unprecedented 12 months, the Executive Committee as one would like to wish all players, clubs and other stakeholders around...

Two teams with a rich 2XI heritage will lock horns in the opening round of the revamped Fired Up Corporation Paddock Shield come May. Honley - who...