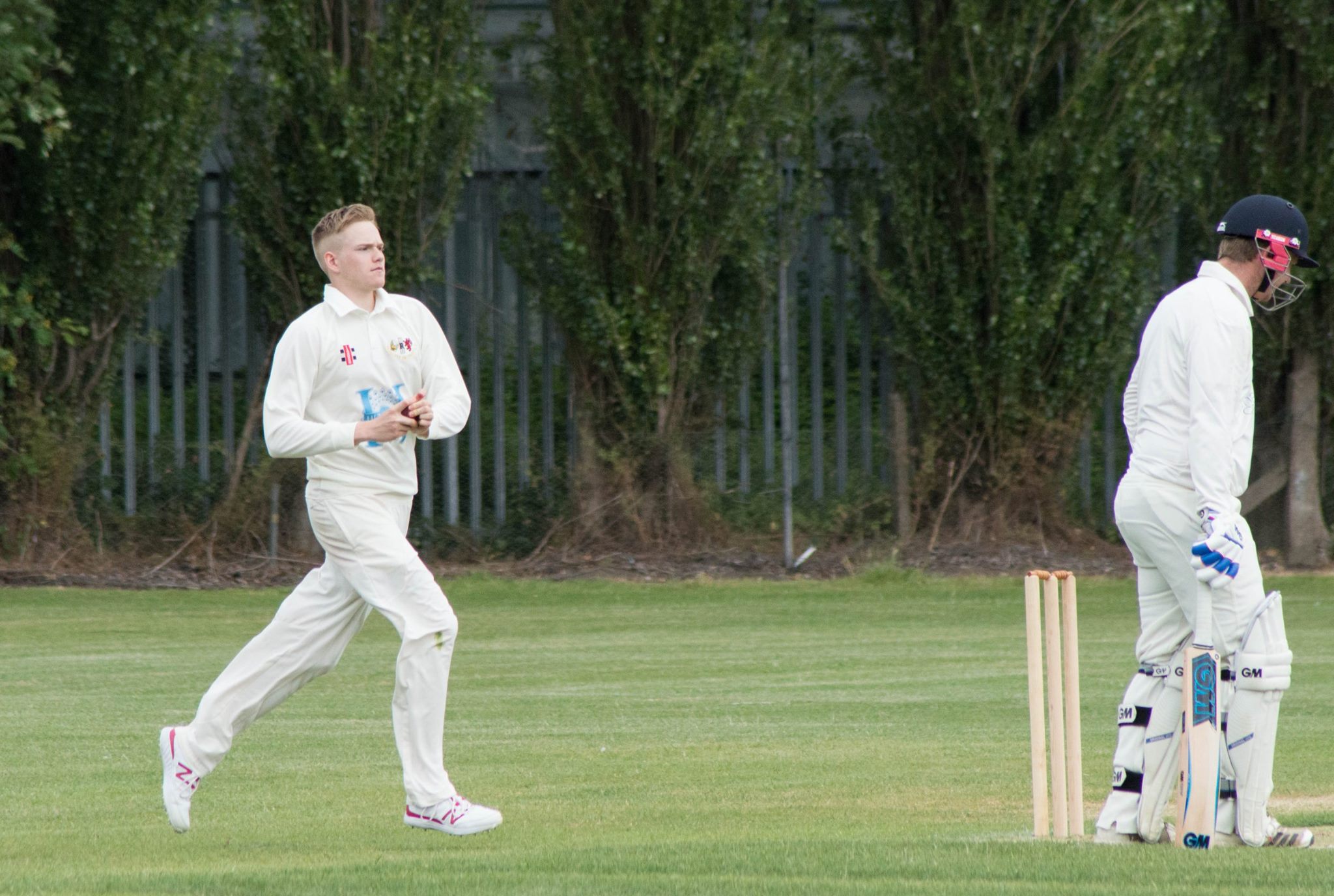 In a topsy-turvy afternoon of cricket, Golcar and Cawthorne finally got their seasons up and running whilst Hoylandswaine moved clear at the top of the Premiership. Almondbury Wesleyans, Skelmanthorpe and Rastrick all moved neck and neck at the top of the Championship whereas Denby possess a 100% record in the Cedar Court Conference following their fourth win in four matches.

Cawthorne have faced one of their most challenging starts to a season this time round with two defeats but they remarkably chalked up a first win of the season at home to Delph & Dobcross. Signs looked ominous after a dominant bowling performance by Delph, who themselves were missing suspended captain Andrew Gleave and talismanic all-rounder Arron Lilley (on county duty) from their line-up. Wasim Qasim (5-21) looked in dangerous mood with a devastating bowling spell helping reduce Cawthorne to 22-5. They were always up against it despite a gritty innings from skipper Chris Walmsley (49) who was unfortunately run out when perfectly poised for a notable half century. With his side all out for a lowly 119 it would take a brave gambler to bet against normally free-scoring Delph but young leg-spinner Jacob Deavin-Baker (7-30) had other ideas. He took the game to the visitors accounting for the entire middle-to-lower order as Delph submissively fell apart. By the time Walmsley (2-13) removed Chris Tipper (27), Cawthorne were firmly in command leaving Deavin-Baker (Featured image) to finish the job for a well-deserved 39 run win.

Jake Lockwood held his nerve to shepherd Golcar over the line for their first win away at Armitage Bridge. They pulled off a knife-edge victory with 8 wickets down as Lockwood (23no) joined forces with wicketkeeper Mark Wilson (20no) to knock off the 30 runs needed with Golcar in trouble at 158-8. Earlier on Armitage Bridge lay down 188-6 with Jaycub Curtling (81) putting in a strong performance. Daniel Moorhouse (5-46) looked to have given his side the edge but a fine 114-ball innings from Golcar captain Steve Whitwam (73) just about kept his team in the match. With 7 runs required for the final over Wilson cleared the ropes in style for the winning runs.

Hoylandswaine once again look in impervious form as they made full use of the availability of Yorkshire’s Alex Lees away at Scholes. He fell just 4 runs short of a superb century helping Swaine pile their way to a big 315-5 batting first, with Lees carving 9 fours and 6 sixes in a 84-ball innings. Overseas professional Muhammad Saeed Anwar Jr (59) chipped in with a half century and there were gainful thrashes by Gharib Nawaz (48), Sarjinder Pal Singh (47) and Chris Holliday (45) as Scholes were made to toil in the afternoon sun. Swaine also have imposing strength in depth on the bowling front where opening bowler Usman Arshad (4-33) and spinner Gurman Randhawa (4-47) kept Scholes on a tight leash. Only wicketkeeper Bradley Birkhead (62) made a dent as Scholes subsided to 159ao.

Nazar Hussain (pictured) helped propel Mirfield Parish Cavaliers to their third successive victory in a close fought 8-run win away at out-of-sorts Kirkburton. They were bowled out for 169 with Javaid Ahmed (6-21) enjoying a particularly good day at the office for Kirkburton. Despite a typically solid 48 from opening bat Andy Smith, Kirkburton were worked over by some probing Parish Cavaliers bowling and Hussain (5-50) helped set-up a confidence boosting win for the visitors as Kirkburton fell just short of the target, collecting two points for their efforts.

Shepley succumbed to a second defeat of the season at home to in-form Thongsbridge. It was a bad day for the Marsh Lane side as they were obliterated with the ball by Ben Raven-Hill’s rampant side after electing to bat first, crashing to 104ao. Little application was shown as most Shepley batsmen fell to single figure short innings with David Wagstaff (5-50) never letting Shepley settle. Shepley still boast some powerful bowling options and Thongsbridge were made to graft for their spoils as Nasir Jamal (6-20) put in a typically potent bowling spell, however Haydn Slodecki (34) and Jack Cassidy (37) ensured the away team returned with 6 points.

Brett Randell put in an intoxicating all-round performance to consign Moorlands to a first defeat of the season in an absorbing encounter at the Memorial Ground after Honley ran out 4 wicket winners. A Michael Rounding (54) half-century was a rare highlight for Moorlands as Randell (5-38) and Tom Craddock (5-43) ensured they stayed in reachable distance at 207ao. Honley, missing the prolific Will Fraine following his signing for Nottinghamshire earlier in the week, were mired in trouble at the start of the reply as Moorlands reduced them to 17-3 due to a hattrick from Nicky Smith (4-42). The vast experience and know-how of Ryan Robinson (61) helped Honley settle the ship before Randell (55no) saw his side home with 3 overs remaining after a well-judged chase.

Shelley find themselves marooned at the foot of the table as Broad Oak recorded a win to push them up to third in the table. Several Broad Oak batters contributed to a challenging score of 250-9, chiefly in gratitude to Tom McCreadie’s (59no) half century. Two Shelley batsmen frustratingly missed out on half-ton knocks; Louis Sykes (48) and Ranjith Bandula-Don (47) both out before the cap could go round. Adam France (6-68) once again caused major destruction with the ball as Shelley rounded up on 185ao in reply. A 65-run win for Broad Oak.

Skelmanthorpe registered their third consecutive win away at struggling Meltham. Opening bowlers Mike Kitson (3-32) and James Crossland (3-40) kept the heat on the home team as Cameron Field’s Meltham side were dismantled by unbeaten Skelmanthorpe. Asif Hooper (42) fired Skelmanthorpe to another win with support from Allan Greenwood (30).

Almondbury Wesleyans routinely dispatched up-and-down Slaithwaite away from home to keep their place up at the top of the table. Matthew Henshaw (4-34) exerted pressure with the ball as Slaithwaite could only put on 145ao after electing to bat first. Henshaw (23) then went to contribute with the bat as he and Bryn Jenkins (46) wrapped up a fairly straightforward victory in 32 overs to continue Wesleyans’ strong start to the season.

Rastrick following their dramatic win at home to Slaithwaite the previous week followed that up with a very one-sided conquest away at Lepton Highlanders. An Asif Afridi (6-8) bowling masterclass ran through ragged Lepton as they dwindled rapidly to 90ao. It took only 47 overs to overhaul the small total with Afridi again showing his class, this time with the bat for a match-winning all-round input. Rastrick knocked over the target for the loss of four wickets.

Clayton West came out on top in a 5-run thriller away at Holmfirth. They were grateful to middle order batsmen Philip Tunnicliffe (53) and Corey Bullock (42) as they inched their way to 152ao batting first. Max Gummerson was the pick of the Holmfirth bowlers but fine margins couldn’t have been any more crystalised than in this match as they were dismissed for 147 in reply. Tunnicliffe (7-24) turned the tie on its head as he picked up a hattrick to exert control with Bilal Hamid (32) top scoring for hosts Holmfirth.

Liam Fletcher (88) ensured Elland got back to winning ways at home to previously unbeaten Lascelles Hall at Hullen Edge. Elland compiled 267-6 from their 50 overs with Paul Winrow (61) contributing heavily for the cause. Skipper Alastair Finn (4-35) did enough to make sure the visitors didn’t get too close despite a half-century from Sheheryar Hassan (60).

Barkisland finally found their feet in the Championship but they didn’t quite have it all their own way during a handsome victory at home to promoted Almondbury who enjoyed their first win of the season the previous week. They were asked to bowl after losing the toss but had Barkisland worried at 86-6 following a fierce bowling spell by Imran Muhammad (5-48). There’s good depth in Darren Robinson’s team and keeper Phil Ackroyd (81) played a huge part in enabling Barkisland to set a competitive score of 248ao with a sublime 81-ball innings containing 13 fours and a six. It turned out to be more than enough as wickets were shared around by the home team. Almondbury had more problems with two players unable to bat but it wasn’t likely to have too much influence on the score with them slumping to 72ao. Atif Kamran’s 77-ball half century came in vain for the visitors.

Denby had a full examination of their promotion credentials at home to Hall Bower and they came through that attractively to establish a four point lead at the top. Denby had to work hard for their win after being bowled out for 161; wicketkeeper Carl Auckland (38) and Zafar Jadoon (28), numbers 7 & 9 put on enough runs to defend against a testing Hall Bower bowling attack. Jadoon (5-19) then starred with the ball with a five wicket haul that unsettled Hall Bower’s chase. Opening bat, Hall Bower captain Russell Evans (48) got close to a fifty but had very support throughout his teammates apart from Danny Russell (36). Denby’s Jadoon cut through the ranks as Hall Bower collapsed from 103-6 to 117ao.

A close game ensued at Thurstonland as the home team successfully defended 121ao against Denby Dale in a 14 run triumph. A five-fer from Mirza Tahseen (5-46) put Thurstonland up against it but Jack England (4-23) blazed his way through the guest’s lower order as they subsided from a winning position at 92-6 to 107ao.

Elsewhere, Cumberworth United stayed close behind in second place after routing Kirkheaton (61ao). They knocked that low score for the loss of no wickets in a simple victory. The runs flowed at Marsden (236ao) as they defeated Mirfield (172ao) and Emley Clarence put on a huge score of 314ao which was enough to overcome strugglers Linthwaite (251-9). Upperthong (286ao) saw off their hosts Birkby Rose Hill (160ao) indebted mainly to Tom Mighall (86).