Jay Cyrus & Will Hinchliffe (main image) became the toast of Golcar after they delivered a harmful blow to Byrom Shield holders Hoylandswaine by edging them out in a thriller at Swallow Lane. Thongsbridge maintained a six point gap at the top by defeating Broad Oak ahead of Armitage Bridge who leapt into second with a win at home to Honley. It was a thrilling afternoon at both ends of the table. Moorlands were left cursing their own performance as Scholes pulled off a victory that gave their own flagging campaign a shot in the arm. Delph & Dobcross stole a win at home to Shepley who were guilty of letting slip a commanding position and Mirfield edged out a five run win at home to fellow strugglers Slaithwaite. Barkisland threw a dampener on Kirkburton’s encouraging recent form to register their third consecutive win.

Golcar’s Jay Cyrus (4-46) gave Hoylandswaine the slip to hand Jack McNamara’s side a magnificent two run win in the cauldron of Swallow Lane. The youngster fired a vital 24no (supported by Dan Woodhead’s 44) batting at nine before blowing a gaping hole in Swaine’s middle order during their reply to Golcar’s 166ao. He removed dangerous batsmen Arron Lilley, Ben Potter and Christian Jackson after earlier accounting for the scalp of experienced opener Sarjinder Pal Singh (15). Will Hinchliffe (3-38) took his 16th wicket in a superb season with three big wickets at the top of the order with Asif Iqbal (32) top scoring on a disappointing afternoon for Swaine. Despite their earlier tribulations; Hoylandswaine still pushed the hosts to the final ball where Adnan Ghani (22) was run out to seal Golcar’s win. Kai Greig and Ben Raven-Hill helped cement Thongsbridge’s place at the summit as they nervously negotiated a resurgent Broad Oak bowling performance to win by one wicket. Ben Balmforth (3-34) and Raven-Hill (3-18) put in the hard yards earlier which looked to set up a fairly routine chase for the table-toppers that are yet to lose this season. Broad Oak’s Dom Finn (34) and Daniel Rushworth (21) ground out useful scores but it was a poor afternoon for the rest in a first innings dominated by the in-form hosts. Raven-Hill - who missed last Sunday’s win at Delph - squandered a fifty, dismissed on 49 but at 79-3 they were still in the box seat. Oak spinner Dan Taylor (4-14) and medium-pace nibbler Jack Hargreaves (3-13) threw a spanner in Thongsbridge’s works in a damaging period of play that threatened to derail Alex Kemp’s side. Kai Grieg (26no) showed maturity to just about see them over the line as they increased the gap at the top to six points.

Delph & Dobcross gave themselves a boost as they hung on to overturn inconsistent Shepley in a close match, thanks mainly to the efforts of one of the youngest players on the pitch; Lucas Selby. The 15 year old Lancashire prospect showed remarkable composure batting at eight to stop the rot and score his first 1XI half-century for the club. His 49-ball stint contained 4 fours and 4 sixes to dig the hosts out of a hole during a match that Shepley dominated for large periods with Tom Chadwick taking 4-53. Mosun Hussain (28) was the only batsman to offer resistance to Shepley’s dangerous bowling attack and when he fell, the signs for Delph appeared ominous. Selby’s heroics, well supported by Luke Hargreaves (27) pushed the home side to 184ao with 8 balls left to give them a decent total to bowl at. Shepley were guilty of a huge missed opportunity as they coasted to 119-1, aided by Delph’s Nathan Jones succumbing to a side injury at the start of his second over. Openers Dan Wood (41) and Chadwick (56) kept the scoreboard ticking along nicely but were ill prepared for a strong fightback as Delph took five wickets in just 11 balls to stun the visitors. Captain Xander Selby (Lucas’ elder brother) bowled impeccably for 3-54 and with frontline bowler Umer Yaqoob (2-47) out of allocation, the hosts still had work to do. Rizwan Ali (2-32) and Lucas Selby (1-19) duly obliged to suffocate Shepley who fell four runs short on 180-8 to conclude a thrilling match.

Luckless Slaithwaite finished five runs short from a hopeless position to lose a ‘must win’ clash at the bottom of the table at Mirfield Parish Cavaliers. Full review to follow. Chris Dennison provided the steel necessary to grind out another win as Armitage Bridge moved up to second with victory at home to Honley. Dennison (79no) hit a massive proportion of the hosts' runs as they successfully chased down Honley’s inconspicuous total of 123ao. Timmy Taylor (67no) hit another half-century but was powerless to prevent wickets falling as Armitage Bridge’s bowlers clattered through an exposed lower order. Captain Jaycub Curtling (4-44) led this inquisition with Jamie Hopper (2-24), Joshua Taylor (2-31) and Musa Ahmed (2-3) all chipping in for the hardworking home side. Curtling was one of the early victims as Honley hit back hard to reduce Bridge to 17-3. However Dennison was a keystone that Honley couldn’t dislodge and he strapped himself in to bring home their fifth win of the season in a 126-6 reply.

Scholes pushed away from the bottom two as they completed an excellent win at home to Moorlands. Eddie Walmsley’s side struggled for consistency with Shoukat Ali (28) top scoring. Wasim Javed (5-3) put in his best performance for Scholes to date as Moorlands fell for 110ao. The hosts were encouraged by welcoming Yorkshire’s Benji Birkhead for his first appearance of the season although he was dismissed without scoring. Brother Bradley (34) and Tom Brook (26) put together the winning partnership after Nadim Hussain (4-29) pushed Scholes hard. Despite the loss of these wickets, Jake Robshaw (9no) and Jack Cooper (2no) held their nerve to reach 111-7 in reply.

Luke Bridges is beginning to hit his stride as Barkisland moved to within a point of sixth place Kirkburton. Bridges hit a fluent 68 in Barkisland’s 161-9; an innings that proved the difference in the end. Sri-Lankan Roscoe Tahttil (58) kept his place at the top of the Premiership batting charts by following up his 3-26 but ‘Burton couldn’t press on from his lead. Cameron Van Rensburg (3-26) and Adam Scott (3-20) pounced clinically after Tahttil’s wicket to strangle Kirkburton who managed 143ao. 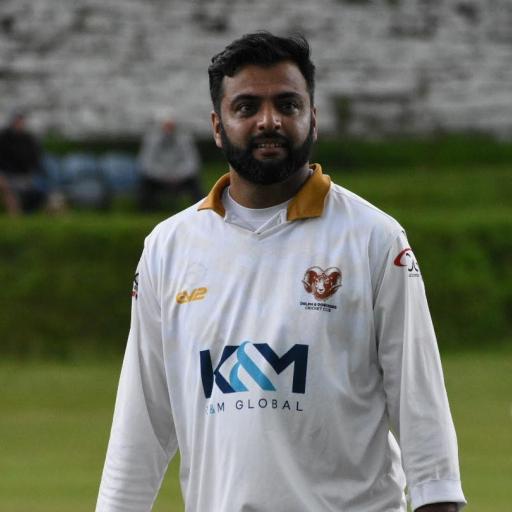