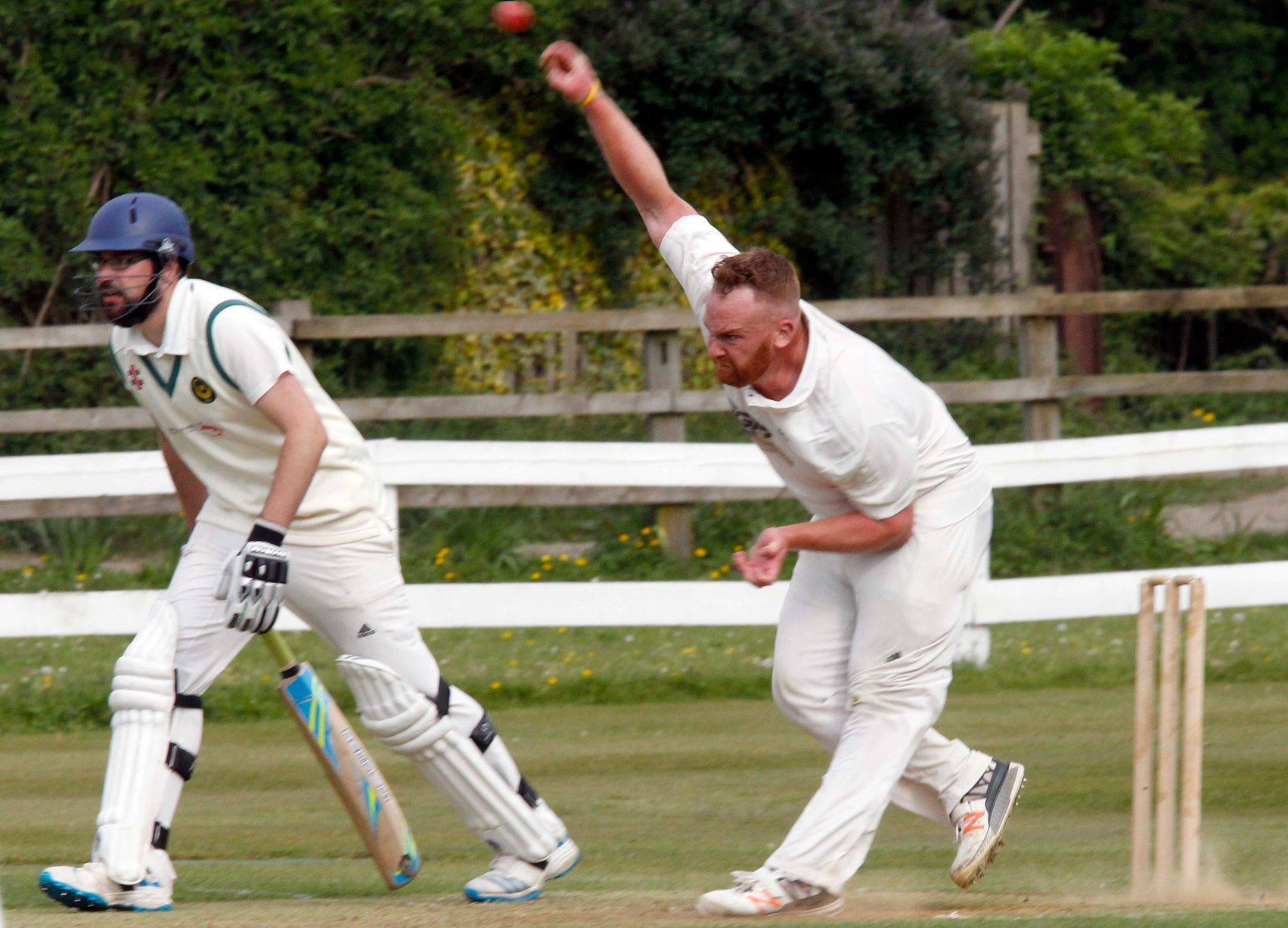 Featured Image: Captain and all-rounder Kyle Hitchman (Clayton West) fired his team to a first league conquest of the season with a spectacular 127no as they put Slaithwaite to the sword at home in the Jedi Championship.

In an afternoon of drama, something had to give when joint leaders Hoylandswaine took on unbeaten Thongsbridge in an early top of the table clash. It certainly didn't disappoint as the Haigh Lane spectators were treated to spectacular cricketing feast with a total of 754 runs scored. A few weeks of dry and warm weather has been a dream for our groundsmen in and around the league and it definitely showed in this particular match.

Thongsbridge set themselves a gargantuan target for their hosts to chase with opening pair Jed Standring (145) and Philip Visser (82) racking up the runs for the visitors. But Hoylandswaine's talented team bat very deep and they paced their innings to perfection. A 77 from seasoned Premiership batsman Max Joice provided the bedrock but it was a stunning 93 from middle-order batter Muhammad Bilal who really injected Hoylandswaine's innings with impetus. Former Durham seam bowler Jamie Harrison (43) added vital late runs as even though Swaine shed wickets, they squeezed home with an over to spare.

Another newly promoted team Moorlands gave reigning champions Delph & Dobcross a real scare at Huddersfield Road. Delph, boasting Lancashire players Arron Lilley and Luke Procter in their line-up just couldn't get going batting first as faultless bowling by Moorlands kept the home team frustrated and under pressure, losing vital wickets at regular intervals. In fact, Lilley's 52 proved to be pivotal as Delph's big guns mostly miscued and the home side collapsed to a vastly under par score of 178ao. With Moorlands breezing along at 37-0 after the first few overs, a first defeat since 2015 loomed for the hosts but two major collapses ultimately became the undoing of the away side. Delph's opening bowler Shakir Muhammad turned on the style to completely demolish the Memorial Ground men with a fierce assault with the ball. Even when middle-order batsmen Andrew Fortis (22) and Mick Padgett (19) started to rebuild to 133-6, irresistible bowler Muhammad found another gear as Moorlands conceded the last four wickets for a single run and Muhammad finished with an incredible 7-47 off almost all his allotted 15 overs.

Honley have found a bit of traction as they registered their third win in three with a high scoring victory away at Kirkburton. Captain Simon Kelly (83) and youngster Lewis Kenworthy (83) added steel to the Honley total of 335-5 along with a breezy 67 from Timmy Taylor. Kirkburton made a decent fist of chasing, but scoreboard pressure told in the end despite Toby Booth's unbeaten 76.

Shepley got their season back on track at home to Skelmanthorpe. It's been a tough few weeks for Danny Glover's men following back-to-back defeats in the league and an early exit out of the Heavy Woollen Cup. Their opponents Skelmanthorpe may have fancied their chances of extending the gloom after a mini-run of good form themselves but it wasn't to be in a fairly one-sided affair. Shepley openers Tom Denton (83) - now free from the rigours of professional football - and Dan Wood (70) set the tone as Shepley rounded on 232-8. Skelmanthorpe's reply hit the buffers from the start with the first three batsmen; Greenwood, Rehman and Alderson succumbing without a run on the board. Local pride was restored but no points were secured as 2016's bowling prize winner Nasir Jamal (4-43) led the way for Shepley.

Barkisland dragged themselves off the foot of the table with a first win of the season as they took advantage of Scholes' erratic form. They restricted their visitors to 204-9 thanks to accurate bowling from Alex Scholefield (4-46) with Tom Chadwick (66) & Tom Brook (62) for Scholes. Barkisland were made to work hard for their win where Luke Bridges (71) held the reply together and the home side triumphed home on the second-to-last over.

Armitage Bridge replaced them at the bottom after they let slip good early bowling work away at Broad Oak. The home side rallied and reached 246ao but it was too much for winless Bridge who spluttered to 180ao in reply.

Cawthorne bounced back to winning ways to further damage Golcar who haven't won since the opening day. Chris Walmsley's Cawthorne team travelled to Swallow Lane hoping to bounce back from last weekends setback and they duly did. Former Shepley batsman Liam Wiles' half-century became crucial as did important contributions from Dehmel (38) and captain Walmsley (44) himself in Cawthorne's 212ao total. The away side showed they're no shrinking violets with the ball in their hand either as they harassed Golcar with nagging spin bowler Iqbal Khan returning a five wicket haul as they romped to a 81-run victory.

Mirfield Parish Cavaliers continued their relentless challenge as they saw off Slaithwaite at home. The newly promoted side are looking good for back-to-back promotions even at this early stage of the season. Almondbury Wesleyans who were promoted with them in 2016 will have something to say in this too as they chalked up an easy win at home to inconsistent Rastrick.

In the battle of the bottom two, Clayton West came out on top against struggling Meltham. Skipper Kyle Hitchman (127no) hit big to secure his side the 6 points. Struggling Meltham's reply ebbed away 27 runs short of Clayton West's 247-9 total tempered by ex-Shepley strike bowler Craig Glover's five wickets.

Another close game was at Kirkheaton as Elland's bouncebackability from the Premiership was sorely tested as they slipped to defeat by 18 runs. Tom Gledhill (126no) in the runs for the home side. Meanwhile fellow relegated outfit Shelley won away at up-and-down Holmfirth.

Lepton Highlanders continue to lead the way with their latest win coming at the expense of Emley Clarence by 6 wickets. They're finding Marsden and Cumberworth United are in hot pursuit as Marsden overcame Almondbury at on home turf at Hemplow and Cumberworth worsened rock-bottom Denby's season with a thoroughly emphatic ten wicket mauling at home.

Elsewhere Upperthong finally got their season going with the first win, Mirfield going down at the Memorial Ground. Thurstonland had enough to see off Birkby Rose Hill and Denby Dale edged out Hall Bower.