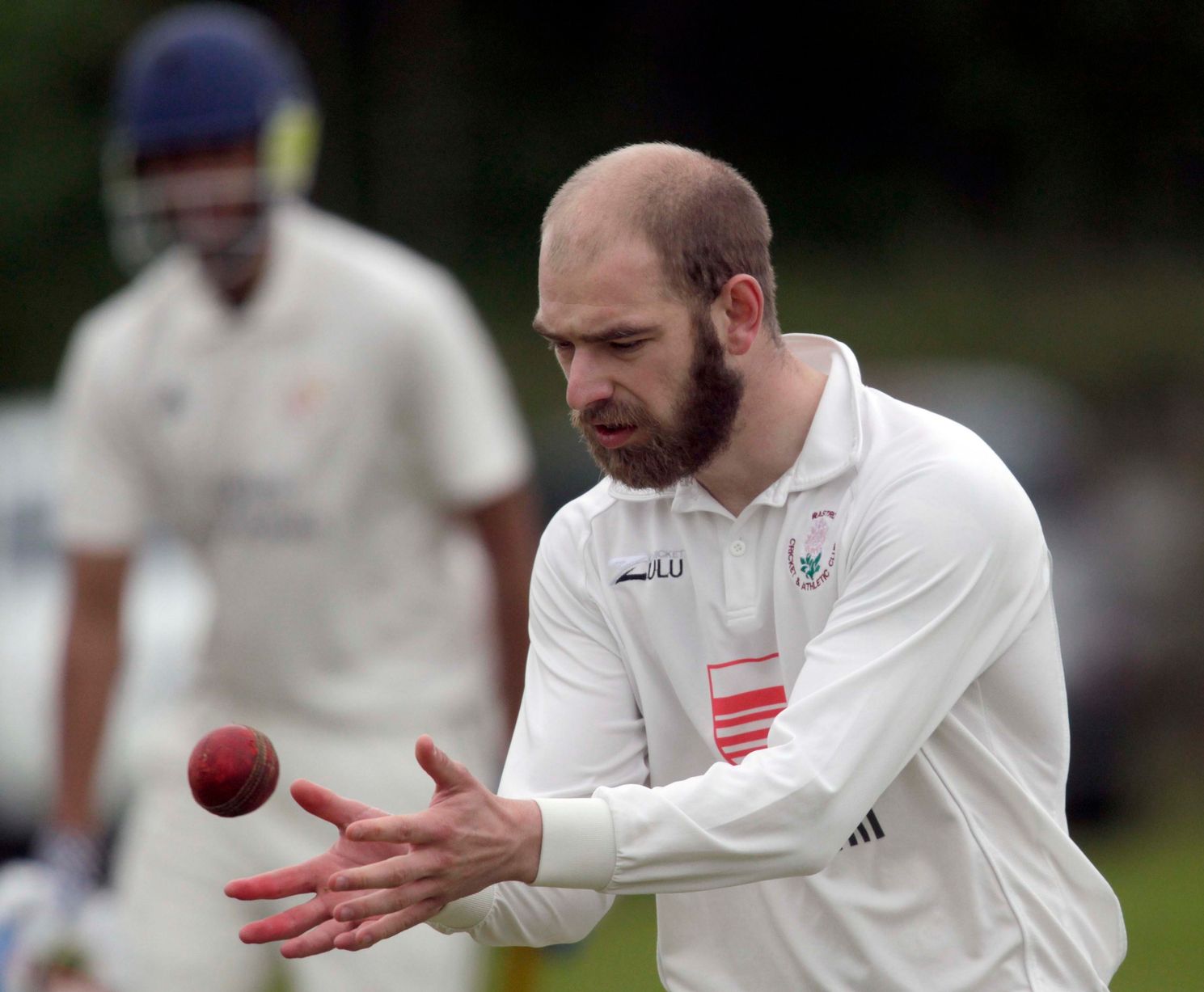 Featured Image: Oliver Pearson (Rastrick) helped his side register a thrilling one wicket victory in the final away at Lascelles Hall with bowling figures of 3-42. One of the highlights of a programme severely disrupted by heavy rain across the local area.

Hoylandswaine took advantage of Delph & Dobcross's inactivity to move four points clear at the top of the Drakes Premiership in an afternoon which saw a vastly reduced match programme with no full 50 over matches played.

Many matches were reduced to 20 over style shootouts and Hoylandswaine's trip to bottom-placed Golcar was one of them as stumps were pitched at around 4:30pm. Batting first Golcar, missing one-or-two first team regulars including influential captain Steve Whitwam set 107-8. Young talented batsman Abdul Wahid (27) and the experienced Louis Aspeling (25) were the only real contributors for the hosts as they struggled to contain Gurman Randawa's spin bowling as he finished with 3-15. Hoylandswaine eased to victory losing only two wickets in their pursuit with SP Singh (30) and Gharib Nawaz (28) making sure they secured a priceless win.

Delph & Dobcross meanwhile had to accept two points with visiting Armitage Bridge as persistent rain showers set in over lunchtime and never released their watery grip until too much damage had been inflicted on the ground. The rain did ease later in the afternoon but following another deluge, Delph skipper Andrew Gleave agreed with his Armitage Bridge counterpart Andy Gledhill that enough was enough.

Honley were also another grateful benefactor as they clawed back 4 points on second-placed Delph with a home victory over mid-table Scholes. Simon Kelly's men are starting to gather some serious momentum with another win in a rapidly pleasing campaign for the Far End Lane club. Honley rattled up a daunting 162-7 off their 20 overs. Kelly himself (26) and the in-form Will Fraine (53) were the key men in Honley's innings despite 4-49 by opening bowler Louis Brook. Scholes had no answer to such savagery with the bat and were scuttled by youngsters Timmy Taylor and Lewis Kenworthy with the ball reducing them to 112ao.

Another team to relish the enforced short format of the game were Moorlands who put together back-to-back victories and snared 6 points in a win at Kirkburton to move above four clubs into 4th place. They put hosts Kirkburton to the sword in emphatic fashion racking up 189-6 from 20 overs who could only reach 168-6 in reply. Individual scores weren't available at the time of writing this report.

Thongsbridge's bright start to their season has derailed somewhat as Shepley inflicted a third consecutive loss on them in a twenty over blast at Marsh Lane. Visiting Thongsbridge made an explosive start as Shepley struggled to contain the flow of boundaries but dangerous South African Phil Visser (30) falling to a good boundary catch by Huw Ellis proved to be a turning point as he threatened to take the game away from Shepley. Tom Raven Hill's superb all-round performance of 31no with the bat and 4-32 with the ball just wasn't quite enough as Shepley nosed home with a ball to spare as the home side judged their chase to laser-guided perfection. Solid club-man Huw Ellis was the Marsh Lane hero finishing on an unbeaten 49 in their scintillating win.

Elsewhere matches were called off in an early relegation crunch fixture between Barkisland and Skelmanthorpe and also Broad Oak at home to Cawthorne as all sides there picked up two points each.

Mirfield Parish Cavaliers continued their good early season promise with a valuable win away at lowly Clayton West with Shelley keeping up the pace by overcoming Almondbury Wesleyans, leapfrogging them into second place in the process.

The rampant Cavaliers successfully chased Clayton West's total of 138-6, laid down by David Swan (56no) and New Zealand skipper Kyle Hitchman (38). Former Lancashire player Tim Orrell's fine half-century was the spine of the Championship leaders innings with Yousaf (34no) ultimately seeing his side home.

Shelley are in a rich vein of form at the moment with their only defeat so far coming against leaders Mifield Parish Cav themselves. They picked up a vital 32-run victory against second-placed Almondbury Wesleyans by setting a solid 208-4 target thanks to Joe Sykes (87no) and Nick Sharp (47). That man Sharp put in a great all-round performance taking 3-15 combining well with overseas man Matthew Dyson (3-34) as Wesleyans took home a point by reaching 176-9 in reply.

Lascelles Hall and Rastrick played out a thrilling match with visiting Rastrick edging out the bottom side in the last over with just one wicket spare. In a 27 over match the home side totalled 129-9 as Rastrick bowlers Wasim Javed (3-27) and Oliver Pearson (3-42) nagged and harassed. But that modest target wasn't so easy to overcome with Rastrick wickets falling regularly. However wicketkeeper-batsman Bradley Birkhead (63) added the steel required and even though he fell with Rastrick close to the required target, the visitors had enough with five wides in the final over to take 6 points.

The rain put paid to any prospect of play at Holmfirth v Meltham, Kirkheaton v Slaithwaite and Linthwaite v Elland.

Lepton couldn't overhaul Thurstonland's total of 125-9 in a reduced overs match as the normally free-scoring visitors fell 17 runs shy on 108ao. Cumberworth United ruthlessly swept aside fourth place Denby Dale, first bowling them out for 40 and briskly knocking off the runs for no loss.

Mirfield and Birkby Rose Hill found it hard for runs as Birkby were bowled out for 65 and Mirfield staggering over the line with only a wicket spare.

The only other Conference match to see action was at Emley Clarence as the struggling hosts were bowled out for 106 in reply to Hall Bower's 202-8. However no play was possible at Almondbury (vs Upperthong) and Marsden at home to Denby to conclude a day of disruption.

Elland put a gloss finish to an impeccable campaign after Umar Abbas and Kashif Talib both fired hefty tons in an intoxicating performance away at...

Following a positive test for Covid-19 and its implications, the Group Orange match between Barkisland and Shepley, which would have decided the group... 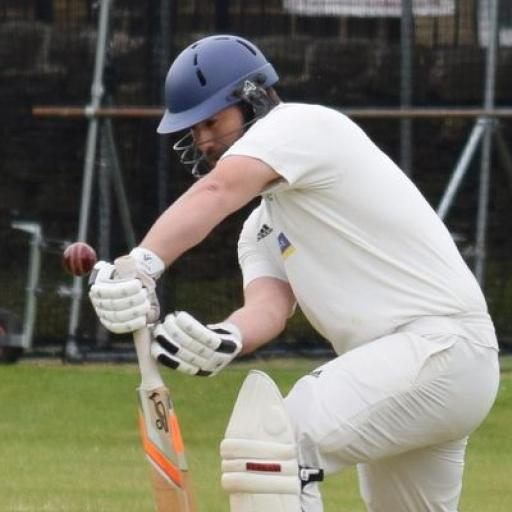 A final day shootout at high noon (well, 1pm!) is on the cards for the final match day after both Barkisland and Shepley both came through testing...

A dry forecast across the region was harshly upturned when barely a single match reached a conclusion with matches abandoned at the halfway point in...