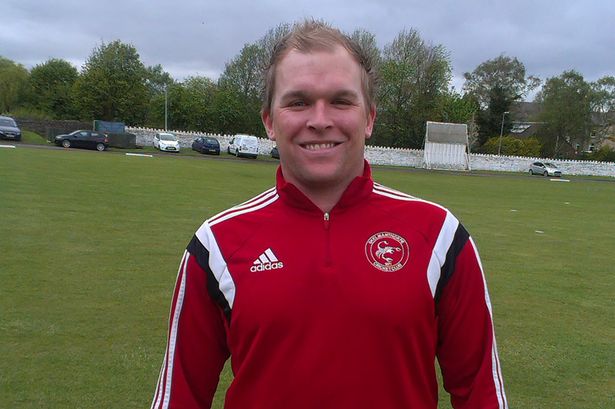 Skelmanthorpe skipper James Crossland led the way to a vital win at home to Kirkburton with a superb six-wicket blast with the ball. Kirkburton couldn't live with his 6-44 as they succumbed to 140ao; Skelmanthorpe moved out of the bottom two for the first time this season.

Picture courtesy of the Huddersfield Examiner.

The top three teams all secured wins to reinforce their lofty aspirations whereas Golcar sent Barkisland to the bottom of the table following a dramatic win away at Scholes. The day was tinged with sadness as each fixture was preceded by a minutes silence, which seemed to be impeccably observed to honour the 22 victims of the Manchester attacks earlier in the week.

Bowlers in the Drakes Premiership must get sleepless nights in the run-up to playing a match at Hoylandswaine and Broad Oak's bowlers were no exception as they were flayed mercilessly by the table toppers. Hoylandswaine were given the perfect start with an opening partnership of 150 between Gharib Nawaz (95) and SP Singh (48). Chris Holliday (103) continued his potent start to the season with yet another century as Swaine helped themselves to a hugely imposing 438-6 after 50 overs. Broad Oak gave themselves a solid start to chase such a massive total racking up 199-3 by the 25 over drinks break; Harvey Booth top scoring for the visitors with 61. Unfortunately the pressure of a high octane sustained response soon told and Oak were only able to put on a further 50 runs thereafter as they crumbled to 249ao.

Delph & Dobcross eased themselves to a win at Thongsbridge but were made to survive a few nervy moments in the process. Thongsbridge who have now gone five league matches without a win will still take heart as they grafted their way to 181ao after being asked to bat first; Alex Kemp (31) top scoring for the hosts. They had Delph in early trouble at 33-3 but a 135 run fourth wicket partnership between the in-form Mosun Hussain (92) and skipper Andrew Gleave (52no) got the reigning champions back in business, winning with ten overs left to spare.

Moorlands entertained Honley in a dress rehearsal for their Sykes Cup 2nd Round clash and visitors to the Memorial Ground would have been thrilled by a 26-run victory for Moorlands. They laid down a defend-able 246ao batting first; Liam Smith (52) the top run-scorer whilst Lewis Kenworthy (4-49) was the standout performer with the ball. Honley lost captain and opening bat Simon Kelly early on but still run Moorlands close helped by Will Fraine's 53 and lower order batsman Sam Denton's 44. Honley will of course hope to restore parity when the two sides meet in the Sykes Cup in a weeks time.

Shepley have now found their groove and recorded another victory this time on the road away at Cawthorne. They skittled out their hosts for a below-par 138 with only former Shepley batsman Liam Wiles (51) putting up any form of resistance. Shepley's win was mainly down to wicketkeeper Shabhan Raheem's wonderful 77 as they reached the target for the loss of five wickets.

Scholes' long-awaited overseas professional, West Indies international batsman Devon Smith finally touched down this week but he'll need to wait a little while longer to taste victory for his new team as they slumped narrowly to defeat at home to rock-bottom Golcar. Batting first, Golcar set a testing 267-5 led by a blistering century by Sri Lankan Upul Bandara (100no) and opener Abdul Wahid (64). Devon Smith followed up 3-53 with a fine 82 and perhaps had he not been dismissed at such a crucial time then the outcome may have been different, such are the fine margins of Premiership cricket. Scholes ran their visitors hard and came into the final over needing 13 to win. With a six hit off the first ball, Craig Ruscoe (4-78) finally held his nerve and grabbed the vital wicket to leave Scholes six runs short but with 2 points rewarded for their efforts. Golcar's 6 points meant they moved away from the bottom of the table.

Barkisland now prop up the table as they fell to defeat away at Armitage Bridge. Matthew Wallbank's (4-42) never let Barkisland off a tight leash and they paced their chase nicely to run home comfortable winners with half centuries from both Matthew West (50) and Saqib Matlub (56).

Elsewhere Skelmanthorpe also crept out of the bottom two following a precious win at home to inconsistent Kirkburton. Skelmanthorpe skipper James Crossland (6-44) led his side well as they restricted Kirkburton to 140ao. After a thundery shower this target had been revised to 131 but it wasn't a problem for Skelmanthorpe who easily won by 8 wickets.

Mirfield Parish Cavalier's quest for a second successive promotion is progressing as planned with their latest coming at the expense of Holmfirth. Four wickets apiece for Connor Rowlands and Danny Hope put paid to the visitors putting up a stiff challenge as Holmfirth were bowled out for 148. Rain meant a revised target of 125 was set which Mirfield Parish Cavaliers reached in just under 25 overs. Dan Broadbent (41no) the main contributor as they won comfortably by 7 wickets.

Shelley and Almondbury Wesleyans are hot on their coat tails and they both picked up timely wins to boost their promotion credentials. Shelley posted yet another gigantic score of 337-5 at home to Linthwaite with no less than four batsmen reaching half-centuries. Louis Sykes (86), Sam Scott (61), Joe Sykes (62) and Yousaf Hasnet (64) all tormenting the Linthwaite bowlers. Again, rain showers meant a revised target of 276 for the visitors but they could only muster 164ao with Moin Hussain taking three wickets for Shelley.

A potent bowling performance from Almondbury Wesleyans' Jacob Gibson (7-23) was far too noxious for Slaithwaite who crashed to 36ao at home, revised to 34. Such a lowly total was never going to provide problems for 3rd placed Wesleyans who reached it for the loss of no wickets.

Meltham picked up a vital win to move them out of the bottom two over fellow strugglers Kirkheaton. Heavy showers there meant Kirkheaton's 218ao was revised to 143. Meltham were fired to victory thanks to Jack Moulson's 49no as they overhauled their target in 20 overs.

Another team on the up is improving Rastrick. They picked up a convincing win at home to Clayton West by 84 runs. Batting first Rastrick helped themselves to 220ao (Revised to 164) with Faisal Javed (75) top scoring for the hosts. Clayton West were undone by four wicket hauls for both Javed and Afredi as they wilted in the chase.

Bottom-placed Lascelles Hall was the only match abandoned away at Elland which saw the teams leave with Lascelles Hall on 163-5. Play never resumed and both teams took home two points each.

Lepton Highlanders are the divisions new leaders as they regained top spot with a superb win at home to Cumberworth United. They were made to work hard for victory even though a solid bowling performance from Jacob Mulhall (5-29) restricted the visitors to 128ao, revised to 82. Lepton's reply hit the rocks early as they crumbled to 12-4 at one point. They recovered well and the experience of Danny Mulhall (44no) guided his time to a priceless 5 wicket win.

Elsewhere 3rd placed Marsden won away at Birkby Rose Hill on the run rate rule. Denby got themselves off the bottom with a win away at Almondbury with luckless Emley Clarence replacing them as their match at home to Upperthong was frustratingly abandoned just after tea after the hosts had posted a challenging 234-2.

Hall Bower were victors at home to Thurstonland by 7 wickets and Denby Dale also claimed the win in their mid-table clash with Mirfield.