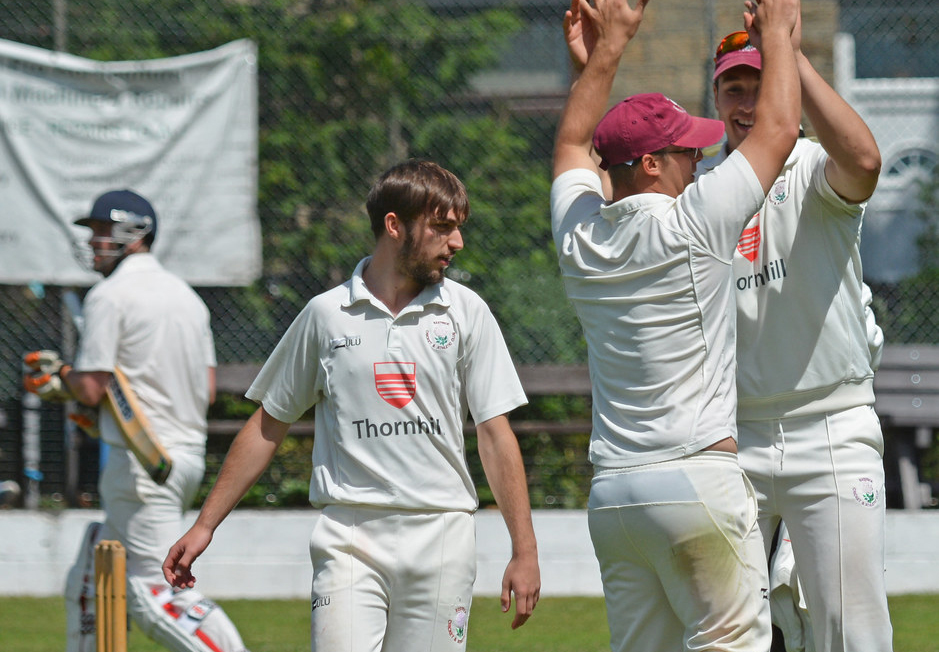 Rastrick are the only Championship side left in the WisdenAuction.com Sykes Cup when they journeyed into the lion's den at Armitage Bridge and pulled off the shock of the competition so far. Golcar’s Steve Whitwam emphatically achieved the outstanding benchmark of  20,000 first team runs with yet another century for his side to earn them a quarter final spot. Cup holders Delph & Dobcross eased through despite a late Mirfield Parish Cavaliers rally.

Championship club Rastrick claimed one of the biggest shocks in the club’s long and proud history with the hard-fought conquest of Armitage Bridge. The victory booked their passage to the quarter finals of the Sykes Cup for the first time in generations as Jacob Waterson’s side lived up to a steady few years quietly building towards this moment. After losing the toss, Rastrick bowled with relentless accuracy to shake Bridge who are normally extremely comfortable in their own surroundings with an excellent home record. Their bowlers never let their hosts off the hook with opening bowler Osama Ahmad (5-31) and Asif Afridi (3-6) picking up wickets at regular intervals to force their Premiership opponents into defensive mode. Other bowlers like Jack Pearson - who conceded just 16 runs from his eight overs helped maintain control as the hosts were dismissed for 98 inside 37 overs. If confidence was sky high amongst the Rastrick players over tea, they were forced into a stark reality check early in the reply as Marco Van Biljon (3-20) and Jack Hinchliffe (3-33) bit back and reduced them to 24-4. From that point, Rastrick’s chase was measured and Jacob Waterson joined all-rounder Afridi settled for an attritional strategy to inch towards their target. Waterson (11) was dismissed after a dogged 43-balls but whilst Pakistani overseas, Afridi stayed in, Rastrick hopes held firm. Fortunately Afridi (44no) shepherded his team as two more wickets fell but with ample overs left in the innings Armitage Bridge’s hopes faded and Rastrick wrapped up a memorable win on 100-7 after 31 overs.

Steve Whitwam (above) surpassed the remarkable milestone of 20,000 runs in an incredibly consistent club career with a century for Golcar away at Barkisland.

Steve Whitwam is well on target to become the Huddersfield Cricket League’s all-time greatest batsman as he gracefully passed the 20,000 run milestone by helping Golcar cruise past Barkisland and into the quarter finals. Whitwam (102) scored a century along with fellow opener Abdul Wahid (126) to set hosts Barkisland 264-2 from 50 overs in a rain-affected tie which thankfully didn’t extend into the week. Whitwam scored classically off 138 balls scoring 14 fours and 1 six and Wahid also took a sustained approach facing 140 balls with 17 fours and 3 sixes scored. Barkisland were in the hunt after starting the reply well with a half-century from George Hampshire (55) but they ran into trouble when captain Jack McNamara (3-24) introduced himself. Four wickets fell for just 17 runs to reduce Darren Robinson’s side to 134-6 and the Barkisland skipper attempted to steer themselves to a win against rapidly rising odds. Opening bowler Will Hinchliffe (2-22) returned to hammer a decisive blow by removing the stubborn Robinson (21) and after that the result was academic with Barkisland pegged back to 174ao.

Mirfield Parish Cavaliers gave Delph & Dobcross some slight agitation before the holders eventually eased through. Visitors Parish made the worst possible start by losing Tim Orrell on the first ball of the match and they faltered even further after being reduced to 52-5. Overseas Nazar Hussain almost added a half-century to the hundred scored the previous day and he emerged as a key wicket for Delph, frustrating them by specifically targeting the fifth change bowler Adam Hayes. His partnership with skipper Dan Broadbent reached 84 runs, however Alex Peters (4-23) made the breakthrough when Hussain (49) was caught after miscuing his attempt. Broadbent (62) fell soon after and the Parish innings stuttered on 150ao. Delph’s reply appeared to be going to plan despite an early hiccup with Peters enjoying a 67-run stand with Mosun Hussain (21). However a cluster of wickets fell midway through the innings to leave them on 93-5 and then a second mini-collapse was sparked after Broadbent trapped Peters (73) LBW to put the hosts on edge at 145-8. It was experienced servant Luke Hargreaves (20no) who eased Delph’s fluttering hearts by casually stroking a couple of fours to see his side over the line on 153-8 with 15 overs remaining.

Revenge for their Sykes Cup semi-final defeat in 2018 was gained by Hoylandswaine who saw off Shepley at Haigh Lane. The visitors’ seam bowlers Danny Glover (3-89) and Nadim Hussain (4-40) had Hoylandswaine on the ropes at 95-5 but as has often been the case, their strength in depth came to their rescue once again. Former Durham man Usman Arshad has proved invaluable in several matches by shoring up the lower order after a wobble. They were indebted to his sublime performance as he started to glue the innings back together before ruthlessly targetting the tiring bowlers with Glover in particular suffering some harsh treatment with 47 runs coming from his last four overs. Arshad (101no) finished unbeaten with Randhawa (35) playing a typical supporting foil in their 116-run partnership which contributed heavily to their 265-8 total. Shepley encountered a turbulent salvo from Hoylandswaine’s pace bowlers with Adnan Ghani (2-44) and Arshad (3-38) both chipping away at the top order to leave Shepley’s reply in grave trouble at 87-5. Tom Denton (73) batted valiantly in the middle order to try and gain a foothold but the end was in sight once he was removed by Waqas Maqsood (4-35), who proceeded to take the last wicket with Shepley considerably short on 204ao with three overs remaining.

It was smooth sailing for Moorlands, who glided past the challenge posed away at Clayton West. The home side began gusto speaheaded by overseas Phil Tunnicliffe (36). However that was about as good as it got before he was dismissed by leg spinner, Siraj Sajid (3-58). The Championship team fell further into trouble after losing four quick wickets to leave them 131-7 before a resolute, back-to-the-wall display by Alex Clegg (42) enabled them to 205ao with three wickets for Darrell Sykes (3-32). Moorlands suffered an early blow in the reply after opening bowlers Tunnicliffe and Craig Glover removed both openers to rattle the visitors on 20-2. Sajid (41) steadied the ship admirably and when he was gone it left a straightforward task to Australian overseas Jason Grosvenor (64) and skipper Eddie Walmsley (57no). The visitors emphatically booked their passage through by finishing on 208-5 with 13 overs remaining.

Kirkburton landed a heavy blow upon visiting Honley to reach the quarter final stage for the first time since 2015. They piled on 318-6 in the first innings with another large century for Sri-Lankan Roscoe Tahttil. The overseas crashed 21 fours and not a single six in a classy innings, scoring quickly off 107 balls. He received fine support from several of his teammates with Toby Booth (33) and Jonny Butterfield (41) capitalising on a demoralised Honley bowling attack. Mel Benito (3-44) performed the best with the ball but it was an afternoon to forget for most of the Honley bowlers. A massively destructive spell from medium-pacer Javaid Ahmad prevented Honley getting anywhere near the lofty target. Ahmad (7-50) blew a chasm in the centre of the visitors batting order as they slumped from 94-3 to 98-7. Lewis Kenworthy (21no) has been a rare bright spark in his side’s miserable season so far but he was helpless to restore any pride as Honley were bowled out for 148.

An attempt to at least emulate and perhaps go one better than their 2017 Sykes Cup campaign is on track for Broad Oak as they swept past the lowest-ranked team left in the competition; Mirfield. Kyran Dill (3-33) and John Keeling (3-25) proved too tough with the ball, despite a half-century from the captain, Adam Goldthorpe (50). Mirfield went on to be dismissed for 102 in the 33rd over. Dominic Finn (41no) and Jack Hargreaves (46no) made the chase comfortable as Broad Oak claimed victory on 105-2 just after 20 overs.

Joe Sykes valiantly batted through Skelmenthorpe’s innings but it was to no avail as they lost at Thongsbridge. Former Shelley man Sykes (87no) was sent in on only the second ball of the afternoon after opener Allan Greenwood was caught behind. Sykes’ teammates regularly fell to accurate bowling from the home side with six bowlers all taking at least one wicket; Alex Kemp (3-13) gaining the best success as Skelmanthorpe were bowled out for 189. The hosts lost Richard Marshall early on but a 115-run partnership between Haydn Slodecki (82no) and Jack Cassidy (66no) easily put the result beyond doubt with Thongsbridge surpassing the visitors total on 195-2 with 16 overs left.