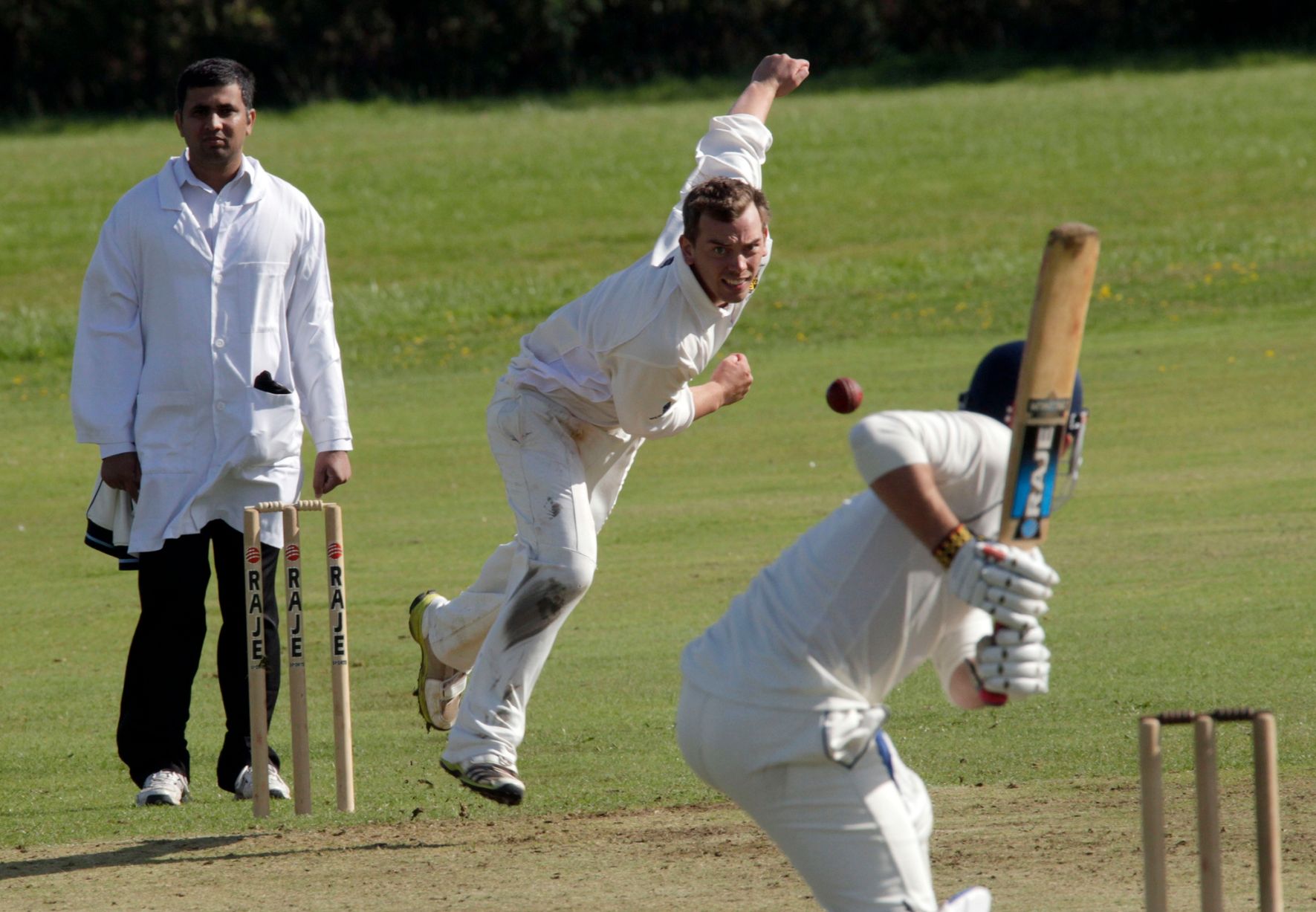 Sibling rivalry was at stake in the Sykes Cup Quarter Finals which pitched two sets of brothers on opposing sides in two different matches. Almondbury Wesleyans deservedly claimed all the glory by booking a Sykes Cup semi final spot for the first time ever whilst Delph & Dobcross, Shepley and Hoylandswaine both marched on to claim their places in the hat.

Brothers Alex and Timmy Taylor found themselves on opposing sides as Almondbury Wesleyans took a short trip to face down Premiership Honley, currently in second place and enjoying their best season in several seasons. Wesleyans have come a long way in the two years had passed when a Timmy Taylor double century handed them a tough lesson in a Sykes Cup first round. But they proved to be more than worthy advisories after holding their nerve in this quarter final tie. The visitors put in a steady first innings performance to set 198-8 from 50 overs with opener Alex Taylor’s (54) half-century giving the middle order a platform to work with. Tom Binns (35) and Jonathan Hoyle (24) added vital runs with Honley, missing the influence of spinner Tom Craddock, relying on Brett Randell (2-24) and Sam Denton (3-36) to prevent the visitors from racing out of sight. In the second innings, Wesleyans started to shine. Buoyed by the early dismissal of Nottinghamshire’s Will Fraine (1), the visitors had Honley in serious trouble at 62-6 as Ashley Smith (4-32, featured image) took control. They were indebted to some miserly bowling from Jack Atkinson (0-26) to ensure overs ticked over and the scoreboard didn’t before Honley began to slowly pull themselves back into the contest with Randell (46) digging himself in. A battle of nerves proceeded to take over as Fred Walker (4-34) captured the crucial scalp of Randell. Honley’s last man, wicketkeeper Joe McNamara (26) caused further slow-bubbling anxiety amongst the visitors when he came in with Honley requiring 65 to win but Smith capped off a stunning bowling performance by claiming the matchwinning wicket of McNamara with four overs left to spark jubilant celebrations.

At Marsh Lane, Craig Glover took his on-song Clayton West side to his former club and returned defeated, but they could take heart from a positive performance. Following good knocks by opener David Swann and overseas Phil Tunnicliffe (64), Clayton West may consider the dismissal of Corey Bullock (64) as a turning point. After Bullock’s rousing 35-ball innings came to an end they faded away from 188-4 to 227ao as Nadim Hussain (6-29) stamped his authority on the match as he and Nasir Jamal (2-30) polished off the tail. A wicket on the opening ball of Shepley’s reply was just the tonic after Tunnicliffe removed the Australian, John Anderson but Clayton West couldn’t kick on from the perfect start. Tom Denton (65) and Greg Wood (98) showed their class with the bat leaving Shahban Raheem (24no) to take Shepley over the line in a six wicket win. 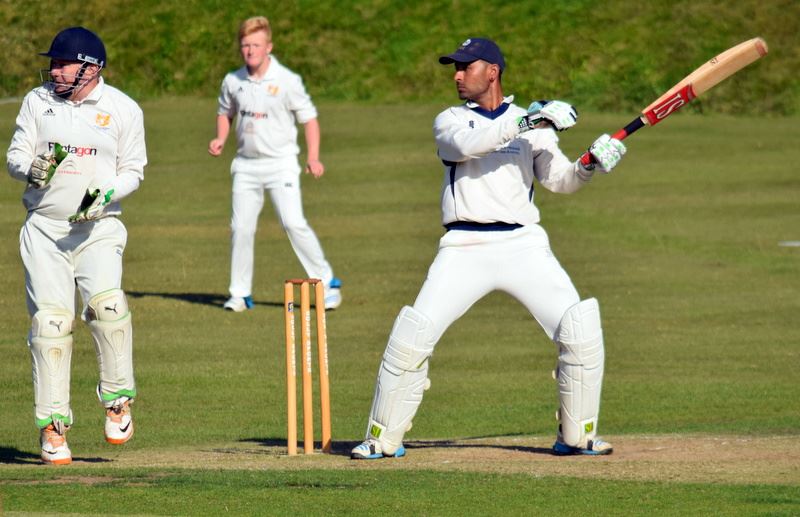 An SP Singh (pictured above) century for Hoylandswaine proved decisive to see off a spirited challenge at home to Barkisland. Singh (114) kept a cool head in his 125-ball innings as the normally fluid Hoylandswaine batters mis-fired on a rare occasion. Along with Singh, Gurman Randhawa (32), Usman Arshad (28) and Saif-Ur Rehman (27) helped Swaine post 256-7 from their 50 overs. Barkisland found themselves up against it in reply, although they saw off the opening bowling threat of Shakir Muhammad and Adnan Ghani fairly competently. It was the introduction of Randhawa (4-14) who sent the visitors into a spin and a rare bowling outing for Chris Holliday (3-44) came up trumps for the hosts. An enterprising final stand between 10 & 11 Matthew Steers (28) and Callum Thompson (20no) added a flourish but Barkisland were well short by 85 runs in the end, finishing on 171ao.

Moorlands were blitzed by fierce pace bowling as they never got out of the blocks away at Delph & Dobcross in the only all-Premiership tie of the round. Delph’s three quick bowlers shared all the wickets between them as Waqas Maqsood (3-27), Umer Yaqoob (3-24) and Wasim Qasim (4-29) cruelly smothered the Moorlands batsmen as the visitors crashed to 85ao batting first. Delph had no issues in reply despite losing opener Mosun Hussain (10) early in the reply. Nathan Jones (44no) and Chris Tipper (28no) shrugged off that loss to record their place in the semi-finals.

The surprise package of the Paddock Shield was Championship Two side Shepley whose Phil Booth (5-26) sent Premiership Two Scholes tumbling to defeat at Chapelgate. Scholes were bowled out for 85 in a remarkably one-sided match which Shepley knocked off for the loss of only two wickets in reply. Sam Haigh (38no) top scored in a fine win to join their first team at the semi-final stage.

Elsewhere, holders Kirkburton crushed Honley at home as Dale Winterbottom (75) top scored on their way to posting 222-8 in 45 overs. Honley weren’t at the races and crashed to 103ao with three wickets apiece for Aaron Moore (3-12), Winterbottom (3-38) and Rob Kettlewell (3-20). Broad Oak saw off a challenge by Championship Two Delph & Dobcross by nine wickets. Delph were bowled out for 145 with Nathan Wadsworth (3-32) and Nick Howard (3-24) in the wickets for Oak and they reached 149-1 with half-centuries for opener Harvey Booth (66no) and Jack Pulley (54no).

Hoylandswaine negotiated an awkward away tie at Skelmanthorpe as they recovered from 123-6 to post 273-9 inside 45 overs. Tawkal Zadran (97) batting at 8 was the catalyst for Swaine in an explosive 41-ball innings that contained 7 fours and 10 sixes. It took the wind out of the Skelmanthorpe sails who made 182-8 in the second innings despite a half-century for Allan Greenwood (55).