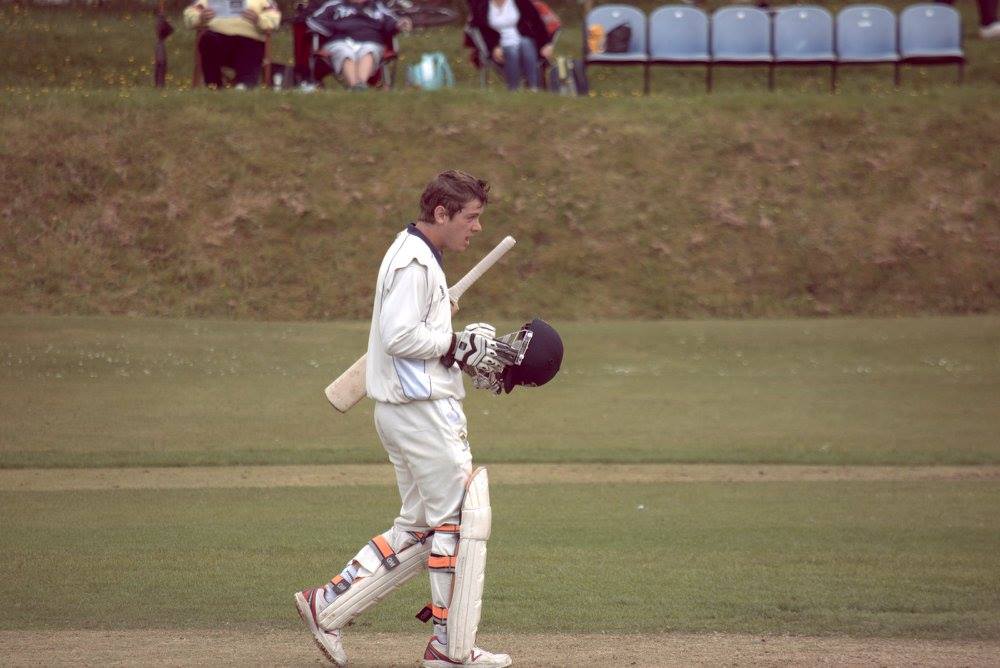 Featured Image: Ben Raven-Hill (Thongsbridge) fired an exquisite 148 with the bat and returned 1-68 with the ball but it wasn't enough as cup holders Delph & Dobcross sensationally pulled victory from the jaws of certain defeat on the last ball of the match.

Cup holders Delph & Dobcross somehow revived themselves from the dead in a remarkable clash at home to Thongsbridge that produced over 660 runs and saw Delph hunt down a daunting Thongsbridge total of 332-6 on the final ball of the match. Andy Gleave's incredible team - who last lost a match in all competitions 50 games ago - found yet another way to cross the line to leave Thongsbridge simply shellshocked. Richard Wagstaff's men had illustrious Delph well and truly under the cosh for most of the match as they piled on 332-6 from their 50 overs. A combination of slightly wayward bowling and simply breathtaking batting, particularly from Ben Raven-Hill's majestic 148 and Richard Marshall's belligerent 84. Shakir Muhammad was one of the only Delph bowlers to come away with their figures (and sanity!) intact with 4-49 off his ten over allocation.

Delph began their chase with intent and a sparkling 150-run second wicket stand between Mosun Hussain (112) and wicketkeeper Shreevats Goswami (49) kept Delph on track in the chase. But when Goswami and Hussain - his FIFTH century of a scintillating season - fell within 20 runs of each other, the balance of power shifted dramatically. Thongsbridge, themselves missing key bowlers Zafar Iqbal and Will Reeves to injuries, applied huge pressure to their hosts who recovered incredibly and were led to victory by no. 8, Michael Finan's (64no) flamboyant innings. Five sixes sailed over the ropes in the last ten overs and it was left to experienced Grant Jones (21no), needing 5 runs off the last two balls, to hammer a pair of fours to win a simply stunning game of cricket.

Another Houdini act was performed by Honley who squeezed past Moorlands with only one wicket spare to book their quarter final place. They bowled well to restrict their hosts to 193ao with skipper Simon Kelly (3-25) keeping things under control with his slow right arm spin. Honley found themselves in deep trouble at 26-4 in reply and had to rely on a marvellous innings by Australian professional Brett Randall (54no) who shepherded his side nervously over the line. 14 year old Ben Harris nervelessly clipping the winning runs for his side in a memorable victory.

Broad Oak dished out revenge for the previous day's Colne Valley derby defeat to Golcar. Revisiting Swallow Lane for the second time in two days, Broad Oak limited Golcar to 154ao with Louis Aspeling (41) the main scorer. Skipper Jack Hargreaves (4-36) kept his former side under the cosh with the ball and the Linthwaite-based side booked safe passage to round three as Ben Hyde (46) and Dominic Finn (64) performed with the bat.

Lascelles Hall may have felt daunted by the prospect of a trip to free-scoring Hoylandswaine but it certainly didn't seem that way as they bowled terrifically to bowl out their hosts for 240. Gurman Randhawa (49no) the highest among a cluster of Swaine batsmen who didn't execute when given starts. Hoylandswaine had more than enough in the bowling department for their Championship opponents and the wickets were shared around between Randhawa (3-23), SP Singh (2-25), Mohammad Arif (2-23) and Jamie Harrison (2-23) as they bowled out Lascelles Hall for precisely half of their total; 120ao.

Armitage Bridge reached the quarter final for the second time in two seasons as they comfortably saw off the challenge of Clayton West. At home and batting first Armitage Bridge set 270-7 - Robin Broom's 80 the highlight - from 50 overs and Clayton West never recovered from losing their first two wickets in the opening over, eventually stumbling to 138ao. Jaycob Curtling (3-31) putting the skids under Clayton West.

An impressive 109no from Scholes skipper James Noble meant the Chapelgate men negotiated a stern test by Championship Shelley at home. Shelley, relegated from the Premiership last season, compiled a testing 223-8 thanks mainly to Nick Sharp's 77no. Scholes eased home with five overs remaining with Tom Chadwick's half-century adding to Noble's aforementioned ton.

Conference pace-setters Lepton Highlanders may have fancied yet another upset as they travelled to out-of-form Premiership outfit Skelmanthorpe. They failed to defend a competitive 203-6, kept in check by James Crossland (4-30), with the Premiership side making their quality count as Aizaz Khan (89) and Liam O'Dea (50) pushed Skelmanthorpe to a four wicket win against the brave Conference side.