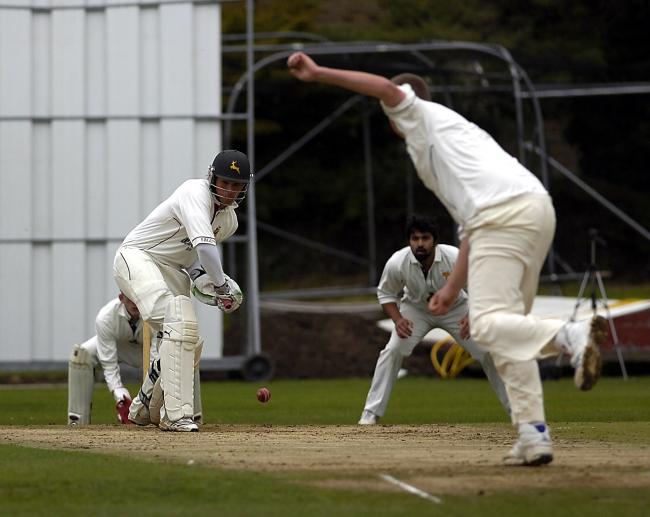 One of the Sykes Cup’s finest all-time individual batting displays helped send Shepley through to the Sykes Cup final as they blew away a Hoylandswaine side who’d already put them to the sword on two occasions this season. Whilst maintaining a 100% record in the league seems to be coming with relative ease, there was a deflating sense of déjà vu here as Hoylandswaine crashed out at the semi-final stage for the third season running.

Shepley skipper Greg Wood (featured image) put in a performance that will be remembered for years to come as he, along with opener Dan Wood rescued visiting Shepley from a precarious position after Hoylandswaine asked them to bat first. It seemed a offbeat choice given the batting power at SP Singh’s disposal but the decision looked to have been justified when nippy bowler Adnan Ghani (5-31) had Shepley in a tangle accounting for overseas import John Anderson (8) and semi-professional footballer Tom Denton for 5-ball duck in the first few overs; the visitors straight on the back foot at 11-2. A 125-run partnership between both Woods ensued and with Dan Wood out for 71, the picture began to appear a lot more healthier. Greg Wood then began to flail the Hoylandswaine bowling attack and whilst his teammates came and went in swift succession, Wood was still there in a remarkable 131-ball innings which saw him finish on 145 by the time Saeed Anwar (2-17) had him out, caught by Chris Holliday. He’d thrashed 14 fours and flogged 8 sixes in Shepley’s 269ao score, one which would still be tough to defend with more restricted overs for their bowlers.

The tone for the second innings was set very early on when on the last ball of the second over, talented all-rounder Archie Greaves accounted for a prize wicket as county player, Alex Lees (9) played hard at his delivery and was bowled. The situation rapidly grew even more uncomfortable for the home side as an early collapse saw four destructive batters fall under the spell of steadfast opening bowler Nasir Jamal (3-15) with Gharib Nawaz, SP Singh and Usman Arshad all succumbing to the seam-bowler. With Chris Holliday also departing for a 5-ball duck it left Hoylandswaine stunned on 46-5 in the 11th over. When classy Pakistani overseas Saeed Anwar dropped anchor with Gurman Randhawa to put on 47 runs for the 6th wicket, it sparked a recovery as Wood turned to his lower order bowlers. Nadim Hussain (3-31) bowled a tight spell of seam bowling along with spinner Abbas Ahmed and it was the ex-Skelmanthorpe man, Ahmed who made the breakthrough by bowling the stubborn Randhawa (22). Wickets then started to fall as first Max Joice (3) and then Ben Potter (9) became victims to Hussain (pictured above) and Ahmed which had Shepley sensing the victory at 151-8. It was Hussain who then stepped up a gear to finish off the final two batsmen taking a good caught and bowled to see off Shakir Muhammad and finally working an edge off Anwar who finally fell for a gallant 92 as Hoylandswaine yielded some 95-runs short on 174ao.

A date with Delph & Dobcross in the final awaits at Honley on August 12th where Shepley will once again need to overcome a team who have beaten them twice at the final stage in 2012 and 2016.