Throwback To Fartown: An Iconic Ground

An interesting article was published on the Yorkshire CCC website recently which shone a light on the old Fartown ground; a notable cricketing (and rugby) venue originally used for County cricket matches and in its later years, the venue for the Sykes Cup Final.

Huddersfield and its surrounding villages have always been one of the most productive in Yorkshire cricket and one of the town’s grounds was used for county cricket very early in the life of Yorkshire CCC. Paul Dyson tells the story of a somewhat-forgotten ground.

In the early part of the 19th century Huddersfield was not far behind Sheffield in its importance as a cricketing centre in Yorkshire. Several village clubs, mostly being formed on a casual basis, existed by the 1820s and these tended to become dominated by Dalton, Kirkheaton and Lascelles Hall as the middle of the century was being approached.

The town’s first enclosed ground was in the suburb of Highfield and known as the Rifle Corps Ground. It was on Trinity Street and the first significant matches which took place there involved various England XIs playing against 20 or 22 of Huddersfield or Huddersfiled and Dalton from 1850 to 1865. In 1866 was formed Hillhouse St John’s CC and two years later it moved to Fartown, becoming Huddersfield St John’s CC. The new organisation erected fences round the ground, added seating and its enterprising approach saw it being rewarded with a first-class match in 1873 in the form of Yorkshire v Nottinghamshire. From the point of view of the result it was a very satisfactory occasion as Yorkshire won by an innings with Kirkheaton’s Allen Hill having match figures of eight for 63.

Two years later ambition was further fuelled by the formation of Huddersfield Cricket, Athletic and Football Club, ‘St John’s’ thus being dropped from the original title. The football was not soccer, the cricket organisation having joined forces with a local rugby club. Additional land was acquired, but both playing areas overlapped to a certain extent, and a pavilion and grandstand were both erected. Rugby was first played in 1878 but soccer made its first appearance four years later with an FA Cup semi-final between Blackburn Rovers and Sheffield Wednesday. In 1890 even more land became available and so the rugby ground moved to a new position with a new stand being built between the two playing areas in 1909.

Yorkshire, meanwhile, continued to visit the ground on almost an annual basis after its first match. The Australians came five times in the 19th century, there were also five Roses matches during the same period and both of the sports’ grounds, as well as the teams themselves, thrived later especially during the inter-war period. Large crowds were the order of the day for the first-class matches and the area remained a successful centre for wider sport, a rugby league game even taking place in 1922 when Huddersfield played Leeds on the cricket section of the campus due to the rugby area being frozen!

After the Second World War, however, the ground started to deteriorate and Yorkshire played its final game there in 1955, it being deemed no longer suitable for first-class cricket. It had hosted 72 such matches, Yorkshire winning 36 and losing only ten. One-day cricket provided a brief respite, though, and the instigation of the Sunday League allowed Yorkshire to return to play ten games from 1969 to 1982. For three of these ten matches Fartown attracted the county’s largest crowd of the season with as many as 14,000 witnessing 40-overs cricket. Unfortunately Yorkshire were not always successful, winning only three, losing six and one game being abandoned.

Sadly the deterioration continued; the ground was now owned by a John Bailey and he developed the pavilion into a venue for weddings and a night-club. His interest in cricket was equivocal; the players had to change in a church hall but he was keen on the pitch looking pristine as a backdrop for the wedding guests. Unsurprisingly, given these circumstances, the cricket section split up after the 1985 season. Some of the players joined in with Lockwood while those who remained had one terrible season in the Yorkshire League before disbanding completely. In 1991 the rugby club moved out to share a site with Huddersfield Town FC on Leeds Road although 2nd XI rugby continued at Fartown. Meanwhile Kirklees Council now owned the ground (it had always previously been leased under private ownership) and Edgerton CC were now the cricketing occupants, playing in the Huddersfield Cricket Association. Through lack of support it moved out in the mid-1990s, played in Salendine Nook until 2004, had one season in Bradley Mills then joined with Dalton and has been playing in the prestigious Huddersfield League since 2017 as Edgerton and Dalton CC.

In the final decade of the 20th century the rot really set in. The pavilion (still a night-club) was fenced off, all of the seating had disappeared, an area formerly used for a bowling green was overgrown and vandalism to signage and a clock, erected in memory of George Hirst, were left unrepaired. The saving grace came, unexpectedly, in the form of amateur rugby league. The whole site is now given over to St Joseph’s ARLC; they have erected floodlights on the old main rugby pitch and the cricket oval, which is clearly distinguishable, contains two junior/practice pitches. The pavilion is once again used for its original purpose. Although not cricket, it is good to know that this historic ground is being well-looked after and is once again being used for meaningful sport. 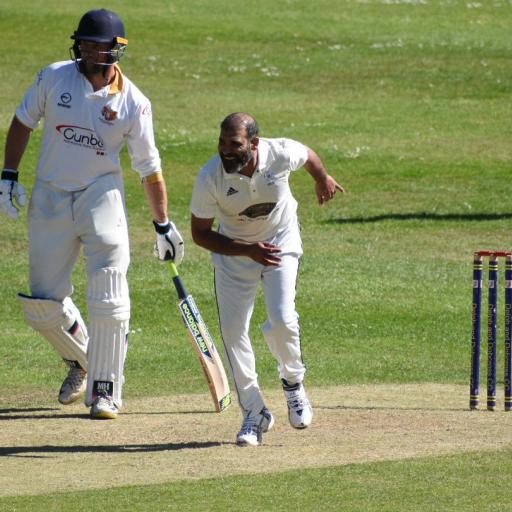 Champions Hoylandswaine have a firm grasp on retaining the Byrom Shield for a third season running when they rode out a tricky assignment at...

“Growing up in Sri Lanka, it was good and my father always pushed me with my cricket but sometimes the mothers would always push you more...

In-form Championship outfit Skelmanthorpe’s memorable Sykes Cup run came to the end of the line on a sun-baked afternoon at Premiership high...