Back to the Main Rules Page

Click on a relevant link below. Additions / amendments for 2015 season are shown in red.


(a) The competition shall be called the allroundercricket.comTwenty/20 Trophy (The Competition) and played under League Rules except as provided below.

(b) It shall be played on a League basis by the 14 Premiership Clubs from the previous season, together with the two promoted clubs from that season. The clubs will be placed into four group pools consisting of four teams. Each member club to provide one team. The group stages shall be followed by quarter finals, semi-finals and the grand final.


(a) All games shall start at 6.30pm with the exception of the final which shall commence at 4.00pm.

(b) The group games to be played on a Tuesday evening in the week allocated by the Match Secretary.

(c) The quarter finals shall be contested by the four group winners who will have home advantage plus the four runners up with the highest number of points. In the event of there being sides with equal points the best average of runs achieved for and against per wicket, calculated from all group matches played, will take the higher position.

(f) Once the group stages are completed the draw for the Quarter Finals and Semi Finals, shall take place at a scheduled Council meeting, a convened Executive meeting or a meeting convened for the purpose of the draw. The Grand Final shall take place on the same day as the Twenty20 Shield final and shall be staged at the ground of one of the four competing clubs, as selected by ballot.


Shall be as Sykes Cup Rule C3.

(b) A fielding zone shall be drawn on the field of play. This shall consist of two semi circles having as their respective centres each middle stump and joined by a parallel line on each side of the pitch. The radius of each of the circles shall be 30 yards but where any part of this zone would impinge within five yards of the boundary line then it shall be drawn at that limitation. The perimeter of the fielding zone shall be marked by a series of coloured discs which, to maintain uniformity, shall be purchased from the League.

(c) Each team shall use its own standard red ball, not necessarily new, but of acceptable quality (unless a League designated alternative ball is supplied). When provided sight screens shall be white. Coloured stumps are optional, provided these are not red in colour.

(d) The use of coloured clothing is optional provided that no item of such clothing is red in colour. The League directive on clothing advertising shall apply except that numbers and/or names may be used on the back of shirts. Should advertising, numbering or lettering be used all eleven players in the team shall be attired in the same design.

(b) The captains shall toss for the choice of innings ten minutes before the scheduled start of the tie and if a team is unable to toss at this time it shall forfeit the right of that choice.

(c) There shall normally be two sessions of play of one hour and fifteen minutes each, separated by an interval of ten minutes, during which time the pitch may be rolled at the request of the captain of the team batting second.

(d) In an uninterrupted tie each team shall bat for 20 complete overs unless all out earlier. In the first innings, should the bowling team fail to complete the scheduled 20 overs in the time allocated of one hour and fifteen minutes, then the umpires shall declare the innings closed after the completion of the over being bowled at that time limit. The team batting second shall, in such circumstances, only be allowed to bat the same number of overs completed less one time penalty over. Should the team bowling second not have completed its overs within the time allocated play shall continue unless inclement weather or bad light intervenes. If an innings is interrupted, as specified in Rule TT5 (e), the over rate penalty shall apply based on the revised cessation time for that innings.

(e) In delayed or interrupted ties one over shall be deducted for every full three minutes and 45 seconds of playing time lost. The number of overs shall be calculated so that both teams have the opportunity of batting for the same number of overs, with a minimum of five per side. In circumstances where, before the commencement of play, the prospect of inclement weather or bad light is a consideration umpires may reduce the number of overs as above.

(g) During any over, at any time, there shall not be more than five fielders on the leg side.

(h) The fielding zone, defined in Rule TT4 (b), shall apply as follows:

(i) The Law of Cricket 31, timed out, shall apply except that the incoming batsman must be in a position to take guard, or for his partner to receive the next ball, within 90 seconds of the fall of the previous wicket. This amendment shall be strictly applied.

(j) A player, when bowling, shall only be allowed a run up of a maximum of ten yards and shall not be allowed to bowl more than four overs in an innings. Where play is delayed or interrupted during the first of a tie, and the total overs are consequently reduced for both teams, no player shall bowl more than one-fifth of the total overs remaining. In the case of the team bowling first in an interrupted tie this reduced allocation will be further restricted by any overs a player may already have bowled before this interruption. Where, in these circumstances, the reduced number of overs is not exactly divisible by five, not more than one additional over shall be allowed to each qualifying bowler in turn until the full revised total has been allocated.

Thus for ease of calculation:

In the event of a bowler being unable to complete an over the remaining balls shall be bowled by another bowler but will count as a full over for that bowlerâ€™s allocation. Where an interruption in play occurs during the second innings of a tie, and it is subsequently not possible to complete the full scheduled overs, should at least half of the allocated overs have been completed then a result is achievable. The winning side shall be the one with the greater number of runs scored from the equivalent number of overs bowled at the point where the game is abandoned. When less than half of the overs have been completed the tie shall be deemed to be abandoned under the provisions of Rule TT2 (b).

(k) In circumstances where the number of overs is reduced for either team, the fielding restrictions outlined under Rule TT5 (h)1 shall be as follows:

If on resumption the number of overs for the restrictions has been exceeded, then the above should take effect immediately.

(l) The Law of Cricket 24.12, shall apply except that the penalty for a no ball shall be two runs. The delivery following a no ball called for foot fault shall be a free hit, for whichever batsman is facing. If the delivery for a free hit is not legitimate (no ball or wide) then the next hit also becomes a free hit, for whichever batsman is facing. For any free hit the striker may only be dismissed under the circumstances that apply for a no ball, even if the free hit delivery is a wide ball. All such penalties are in addition to any runs that may be scored otherwise.

(n) In the quarter finals, semi-finals and final only, should the scores be level, the winners shall be determined by reference to the following criteria in order of priority:


The provisions of Rule C5 (a) shall apply, except that the all-inclusive expenses shall be 50% of the standard rate, calculated to the nearest Â£1.00 above.


The team winning the Competition shall receive the allroundercricket.com Twenty20 Trophy and are entitled to hold it until the 1st July of the following season. 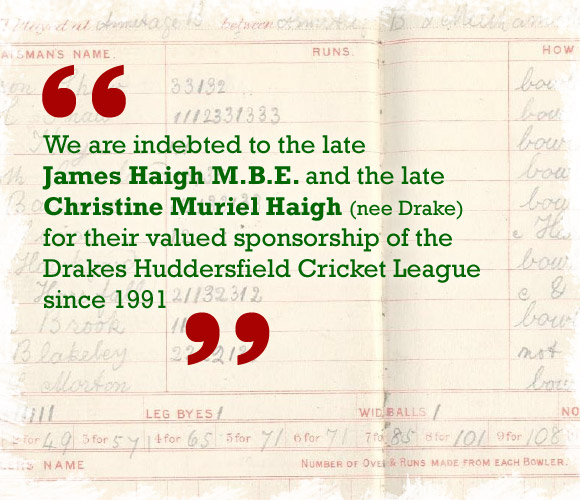