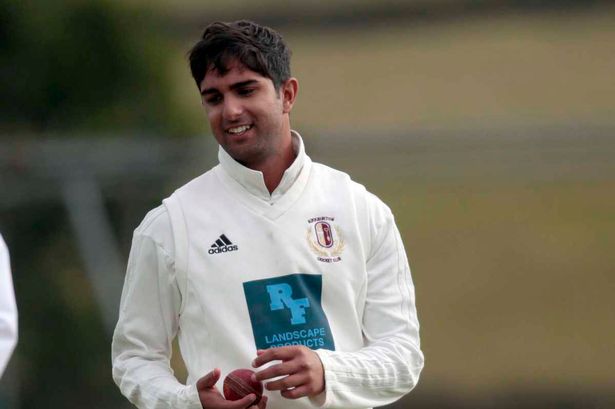 Gurman Rhandawa (Hoylandswaine) starred with the ball taking five wickets for 25 runs as he helped down Armitage Bridge as Swaine maintained their impressive 100% record.

Three teams are left unbeaten in the Drakes Premiership as Delph & Dobcross, Hoylandswaine and Thongsbridge all registered wins in Gameweek 3.

Hoylandswaine travelled to winless Armitage Bridge who coincidentally gave them one of their toughest matches last season but it was a much more routine affair this time around. The Bridge let slip a solid enough platform from 87-3 at drinks to 125ao as the spin pairing of SP Singh and Gurman Randhawa got to work with the ball with only opener Matthew West (58) offering resistance. Swaine's start to the season has been trail-blazed by exciting opener Gharib Nawaz but it was his opening partner and new signing Chris Holliday (85) who laid the path to victory.

Delph & Dobcross showed their class with the bat once again as they registered the highest score of the afternoon on the way to victory at 2016 Byrom Shield winners Scholes at Chapelgate. Their large score was down to a rock-solid platform laid by Mosun Hussain (78) - continuing his splendid start to life in the Huddersfield League - and classy Indian Shreevats Goswami (63). By the time Scholes had dismissed the pair with 15 overs left, big-hitters Graeme Simpson (51) and Arron Lilley (83) made the tiring Scholes bowlers suffer. Lancashire all-rounder Lilley facing just 35 balls as he crashed 8 sixes and 6 fours in his remarkable innings. Scholes in reply were never really in with a sniff, especially after opening bowler Wasim Qasim (3-11) single-handedly destroyed the Scholes fragile upper order. Scholes' captain James Noble restored pride with his solid 67 with Scholes almost batting out their entire 50 over allocation.

Something had to give in Thongsbridge's first home match of the season as they faced unbeaten Cawthorne with the hosts coming out on top by 35 runs. Batting first Thongsbridge put on 170ao with several players putting in key contributions; notably John Standring (45) and Ben Howitt (47). The newly-promoted hosts put in a solid all-round bowling performance to restrict Cawthorne and even the experience of Iqbal Khan wasn't enough for the visitors as he ran out of partners on 46. Iqbal (3-29) and Tom Raven-Hill (3-55) the standout performers with the ball.

Barkisland are one of two teams still searching for a win as Honley got off the mark in fine style at Far End Lane. After losing both their matches by the narrowest of margins they gave their home fans something to smile about as Barkisland were held to 169-8. Medium-pace bowler Lewis Kenworthy (5-33) was the main Barkisland tormentor. Honley cruised to the win with plenty of time and overs in the bank as Bjorn Taylor (58no) and Richard Parker (53) turned on the style.

The Premiership looks to be so open this season with another team chalking up their first win of the season; Skelmanthorpe. Their visitors Broad Oak made them work hard for their 6 points with Dominic Finn (112no) enjoying a good start to his season with a century and Adam France (58no) offering decent support as Broad Oak made 239-6. Allan Greenwood (61) helped lay the foundations in reply as Skelmanthorpe took control before Ibrar Younas (70no) and Ahmed (33no) bagged the six points with a few overs remaining whilst Oak receive two points.

Another close match took place at the Memorial ground with 2016 Jedi Championship winners Moorlands seeing off a challenge from Shepley in a close, low-scoring match. Restricted to 125ao Moorlands displayed all the grit and determination they'll need if they want to stay in the top flight as bowlers Smith (4-39), Walker (3-54) and Sykes (3-18) made big inroads into the Shepley batsmen with the visiting team falling short by only 6 runs. They'll collect two points for their efforts though.

Finally, Kirkburton made short work of Golcar bowling them out for 94 at Riley Lane and then knocking the runs off for just 1 wicket. Toby Booth (40no) the main run-scorer as 'Burton made it two wins from two.

Mirfield Parish Cavaliers are the early pace-setters and ensured their title credentials stood up to scrutiny with a big win away to Shelley who last season were two divisions above the visitors. Tim Orrell (87no) led his side to victory and whilst Shelley remained faintly in the hunt they were bowled out for 190 despite a half-century for ex-Kirkburton batsman Nick Sharp.

Rastrick won't be too far away from end-of-season honours if they continue in the way they demolished Kirkheaton at Round Hill. Setting Kirkheaton 290-6 after Ovais Hussain (65), Bradley Birkhead (53) and Faisal Javed (96no) set about them with the bat. Kirkheaton's reply was spirited but not enough to overturn the Rastrick total finishing 106 runs short being bowled out for 184. Nick Swift with an unbeaten 40.

Elland kept up a 100% home record as they saw off visitors Holmfirth in a battle between two of the most historically successful DHCL teams. Holmfirth's reasonable 195 total was overhauled by the loss of only 2 wickets with ex-Skelmanthorpe batsman Liam Fletcher (95) providing the anchor for Alistair Finn's men. Elland winning by 8 wickets in the end.

Elsewhere there were wins for Almondbury Wesleyans away to Lascelles Hall, Slaithwaite at home to Meltham whilst Linthwaite v Clayton West was a late result.

Marsden are looking to bounce back from their relegation from last season's Championship and recorded a win against visiting Emley Clarence to put aside disappointment from their Sykes Cup Preliminary Round exit last weekend. A potent bowling display by Simon Robinson (5-24) rolled out Emley Clarence for 78 after Marsden set a 171-7 target. A fifty from Jack Smith and 31 by Martin Kyle were the main run scorers for The Cuckoos.

Lepton Highlanders are the new Conference leaders as they put aside Denby Dale in clinical fashion away from home. Denby Dale's 112ao was overhauled in relative comfort mainly thanks to an 80no from Hussain as they made it three wins from three.

Elsewhere three teams are still searching for their first league victory as Mirfield went down to Almondbury by 47 runs, Upperthong were comprehensively beaten at Cumberworth United and Denby slipped to defeat at home to Thurstonland.

Birkby Rose Hill inflicted a first defeat of the season at home to Hall Bower. Two five wicket hauls; one for Birkby's Anjab (5-40) and one in vain for Hall Bower's Hussain (5-46) were the picks as the bowlers ruled the roost in that match.