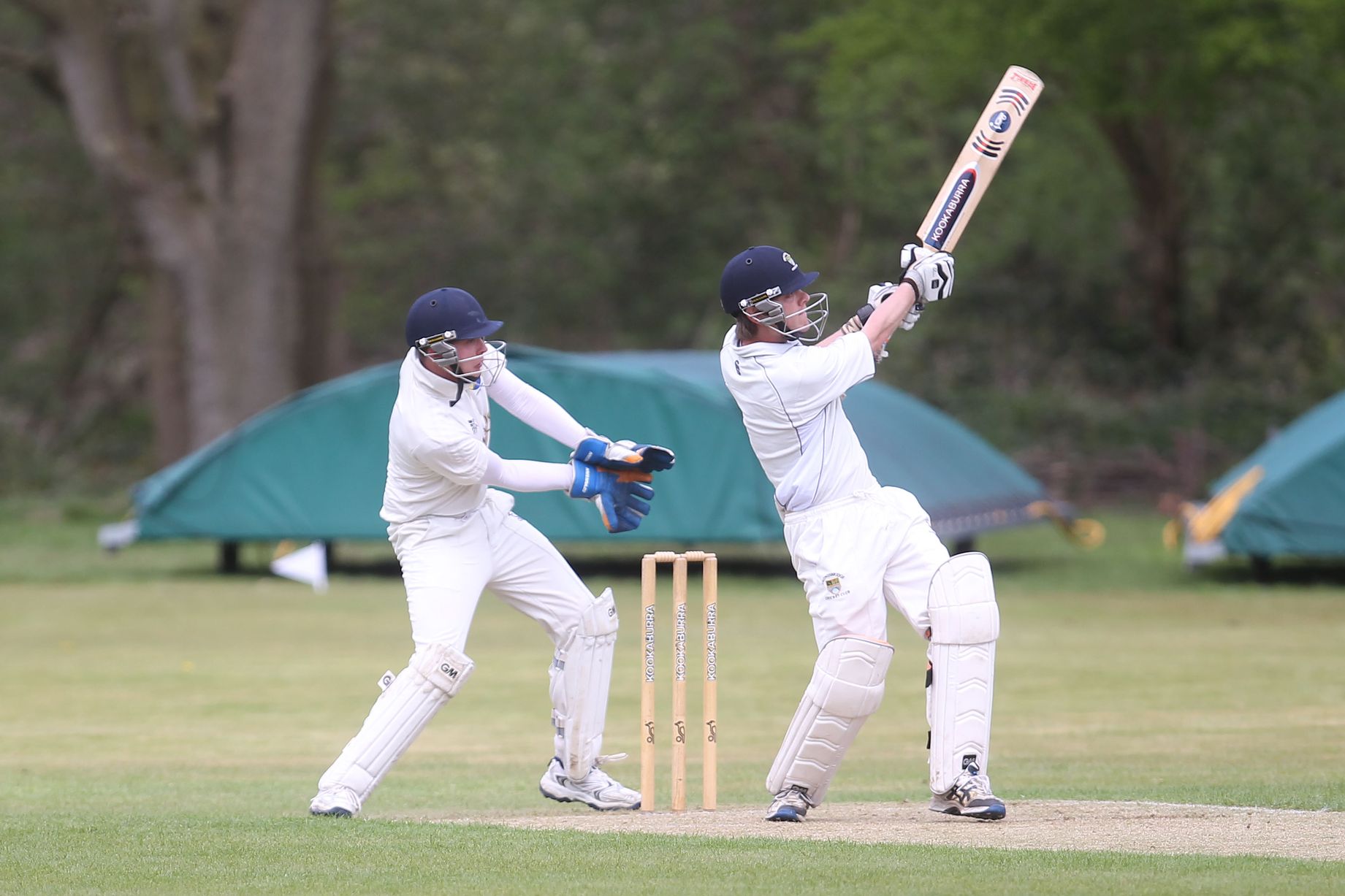 Ben Raven-Hill scored his first century of the season to fire T20 finalists Thongsbridge to victory at home to high-flying Scholes. Hoylandswaine overwhelmed Barkisland for a third time this season to stride even further clear at the top. Meanwhile, the intriguing mix at the bottom of the table added a further layer of complexity as bottom two sides Delph and Armitage Bridge both won to improve their chances of avoiding the drop.

Prolific Thongsbridge batsman Ben Raven-Hill (pictured above) put second-placed Scholes to the sword and registered his first hundred of the campaign during an emphatic victory at Miry Lane. Alex Kemp’s men had only just beaten Scholes to land themselves with a T20 Finals Day to host on Sunday 24th July and they began where they left off with a crushing first innings batting performance. Raven-Hill (104) hit 14 fours in a dominating display that gave room for others to flourish. Wicketkeeper Richard Marshall added 46 and there was time for a brutal 22-ball half-century for Kemp who hammered 6 fours and 4 sixes as Thongsbridge made 295-9. Scholes are themselves capable of chasing a hefty target but losing key man Jack Shelley after only three balls badly scuppered them. Bradley Birkhead notched 81 but he had no meaningful support and Scholes' innings was brought to a premature close as they were bowled out for 147. Kieran Abrams (3-61) and Pragam Sharma (3-17) shared six wickets each as Thongsbridge remained in fourth place.

Nine of Hoylandswaine’s 11 batsmen all weighed in with double figure scores to thwart Barkisland for the third time this season. They registered a one-sided Sykes Cup quarter final success in Calderdale in June and they returned to claim six more points here as they stormed further ahead at the top of the table. Opener Asif Iqbal (61) led the way but there were also solid knocks from Arron Lilley (43, pictured above) and big-hitting Faisal Irfan (31) in Swaine’s 296-9. Overseas Numan Akbar and Jake Finch both claimed three wickets each for the home side. Any hopes Barkisland had of springing a surprise victory evaporated rapidly after the top three batsmen failed to trouble the scorers. Cameron Van Rensburg (82) put in a spirited performance down the order but veteran Sri Lankan Ranjith Bandula-Don (4-41) enjoyed a successful afternoon stepping in for the absent Muhammad Azzharullah as Barkisland were dismissed for 190.

A narrow one-run win at Broad Oak was enough to thrust Skelmanthorpe out of the bottom three for the first time in four weeks. The home side were guilty of letting a priceless win squirm from their grasp as they lost their way chasing Skelmanthorpe’s 226-4 total. Jack Newby notched his fifth century of a faultless season as he demonstrated his guile and patience once again in a delightful 104no from 131 balls. Broad Oak recovered from 46-3 to sit well poised for victory on 157-4 thanks to Fletcher Coutts’ half-century. Coutts (51) was snared by a catch from George Sommerville to spark a middle-order wobble as Alistair Snowden (3-67, pictured above) began to put the skids under his former team. Tom McCreadie (32) and Alex Slack (29) then took control and appeared to be guiding Oak to a crucial win until three wickets in the last three overs left the home side dejected, one run short on 225ao.

Armitage Bridge lynchpin, Jaycub Curtling, breathed hope into his side’s relegation battle, by putting in another courageous performance. Curtling’s 3-36 was a nice foil to the battering ram of South African Maahir Eksteen (4-20, pictured above) who had his best return since arriving at the club in early-June. Moorlands couldn’t cope when batting first and without Shoukat Ali’s 56, the contest would have been far more one-sided. Chasing a 136ao total, Bridge’s batsmen suffered themselves at the hands of James Standfield (4-47). Chris Dennison made a stubborn 32 but Moorlands couldn’t remove key man Curtling, who bided his time to accumulate a brilliant 54no. Curtling shepherded his side, who survived a late barrage at 126-9, to a priceless six points and move within 11 points of safety.

New Zealander Jed Wiggins (pictured above) made a superb century for Almondbury Wesleyan - his first for the club - but they left relegation rivals Delph & Dobcross with just a point after a high-scoring encounter at Huddersfield Road. It was the first time these clubs had ever met at this venue and the hosts made the most of an excellent batting surface to put up their highest total of the season. Mosun Hussain (92) and Nayyar Abbas (69) shared a 115-run second wicket partnership as Delph threatened to amass a gargantuan total. However tenacious bowling by medium pacer Ash Smith (5-79) reigned in the hosts as they settled on 309-8. Wiggins frustrated Nathan Jones’ side with a patient 111no from 114 balls, but he ran out of partners as Delph’s strike pairing of Abbas (3-55) and Adnan Ghani (5-56) nicked wickets at vital moments. The Wesleyan’s reply eventually ran out of steam as they finished up on 243ao with five overs left.

Honley cantered to an easy seven-wicket victory at mid-table Kirkburton to move above Scholes into second place. A combination of slipshod batting and imposing bowling caused Kirkburton’s demise as they hobbled to 123ao with captain and former Honley man, Jonny Butterfield top-scoring with 31. Timmy Taylor and Jeremy Hackett (pictured above) both grabbed three wickets for the visitors and they went on to complete victory by replying with 127-3. Eddie Wilson (40no) and Lewis Evans (34no) made sure of the win as Honley cruised home on 127-3.

Golcar’s worrying slump continued as they lost at home to Shepley to sit just a point above an constantly-changing relegation zone. Pranav Sasarla made a half-century for the visitors and all-rounder Oliver Davidson (pictured above) clocked a scintillating 88 from 60 balls as Shepley set 222-7.  Eight Golcar batters made double figures in the reply, but none could convert to a score that would overhaul Shepley’s total. Dan Woodhead (34) was the home team’s top scorer but the reply withered as Davidson (5-58) enjoyed his second consecutive five wicket haul to cut Golcar’s reply short on 194ao. 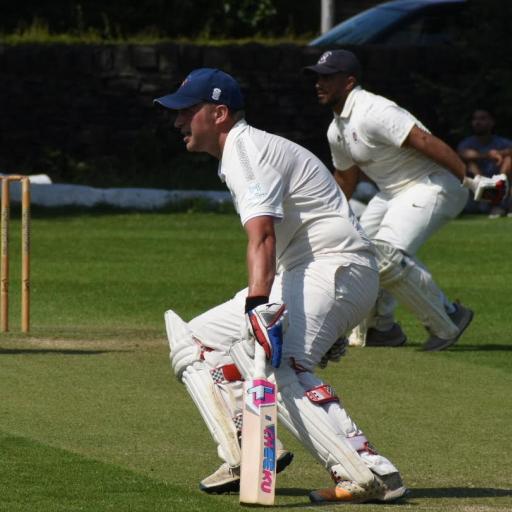 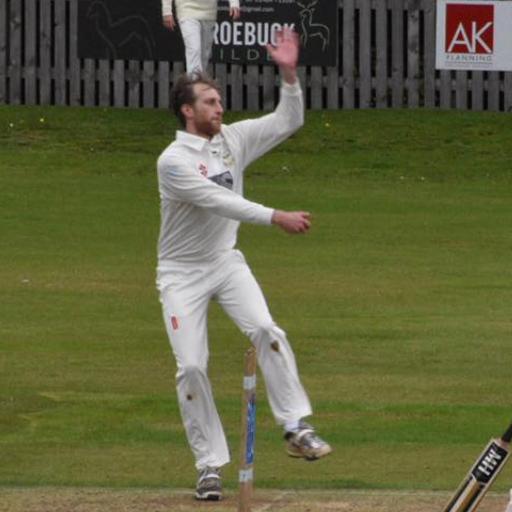