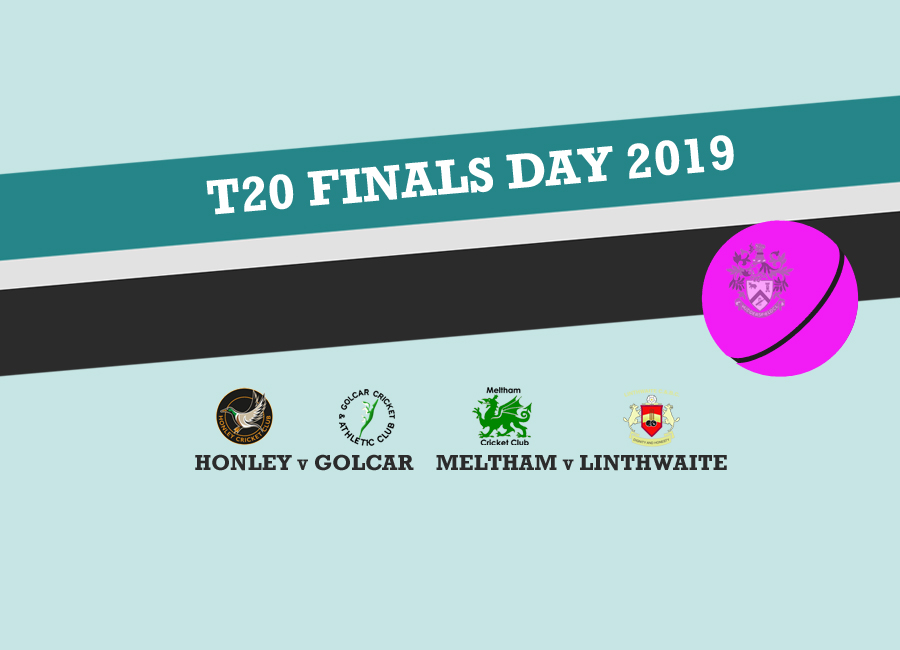 A new name will be mounted on this season T20 Shield when Meltham, who host this season’s Finals Day, take on local rivals Linthwaite; both teams having never made a final appearance in the 12 seasons of T20 cricket. It’s a pleasant distraction from the league for the two Conference teams, located not far from one another and who’s recent fortunes it's fair to say have been forgettable.  For Meltham, it’s a flashback of nostalgia to the hugely successful 90’s team who dominated the Huddersfield League where they regularly featured in finals, meanwhile Linthwaite’s “salad days” stretch much further back.

Meltham captain Cameron Field has seen his side’s form take a remarkable uplift since the return of Alex Clegg who came back to the club after playing Premiership cricket at Scholes for four seasons. They have been responsible for a number of remarkable high profile scalps during their run to the final beating Cartworth Moor (away, round 1), Rastrick (away, round 2) Lepton Highlanders (away, quarter final) and holders Slaithwaite (home, semi-final). The key batsman for Meltham in this season’s T20 competitions has been Jack Moulson who has scored 139 runs at an average of 46.33 with a top score of 75 (vs Lepton Highlanders). With the ball, Rizwan Malik has six wickets to his name with a stunning (for T20!) average of 7.83 and a best of 3-5 (vs Rastrick).

Raheel Akhtar leads a spirited Linthwaite side who seem to have found their groove in the quick scoring form of the match in direct contrast to their indifferent league form. The club were hit by a massive blow on the eve of the season when club stalwart Derek Cowgill passed away but it is to their credit that his memory has been cherished with a major final appearance so soon after. Theirs has been a more low-key passing with a notable victory at home to last season’s runner-up Elland at the quarter final stage. They have also beaten Hall Bower (away, round 1), Edgerton & Dalton (away, round 2) and Flockton (home, semi-final). Akhtar will be hoping Navid Amin replicates his strong T20 form having scored 124 runs in the four matches played with an average of 31.00 and a top score of 62. Abdullah Amin is the top man with the ball having taken 10 wickets during the competition at an equally potent 7.70 average with a 3-15 best in that Flockton semi-final win.

Honley make a second consecutive appearance in Sunday’s showpiece T20 Trophy final and their third in total where they will hope to go one better after being well beaten by Hoylandswaine last season. They also lost to Delph & Dobcross way back in 2008 so will be keen to reverse that trend on Sunday against Golcar, a team they met at the group stage but their match was one of the many group matches that were abandoned. The Swallow Lane side have reached this stage just once before with a defeat at home to Kirkburton in the 2011 event so again, a new name will grace the 2019 trophy.

Skipper for Honley Timmy Taylor is likely to lead his team (Eddie Wilson seemingly took the captaincy in their semi-final match) and will be looking to big scoring Simon Kelly, who has over 500 runs to his name in all competitions this season with an average of 41.50. He scored a 47 in their semi-final victory at home to Kirkburton with Jack Hebden pushed up the order hitting a half-century. Taylor has a raft of bowling options Lewis Kenworthy leads the way with 27 wickets in all competitions and his 5-10 was crucial against Kirkburton as they were bowled out for 113. In a virtually washed out group, they edged a 10 over thrash away at Barkisland with a ball to spare. They were drawn away at Moorlands in the quarter final round and pulled out another fine bowling performance to defend their 164-9 total. Sam Denton took 5-27 as Moorlands were bowled out for 120. Taylor also has back-up support from spinner Max Morley (17 wickets) and medium-fast bowler Archie Greaves (16 wickets) should he be free from Yorkshire Academy commitments as well as himself with a remarkable average of just 8.77 taking 13 wickets.

Jack McNamara has injected a new positive vibe around the place at Golcar since arriving over the winter as captain from Marsden. The likeable Aussie has returned to the club where he last enjoyed a spell after joining back in 2011 and has led them to a Sykes Cup semi-final in his first season. Golcar’s T20 campaign saw them top Group 2 ahead of Honley which was mainly down to their run-rate victory at home to Barkisland in the second match (Their other two matches were completely abandoned). At the top of Golcar’s batting leaderboard is mercurial all-rounder Steve Whitwam with a total of 638 runs so for this season in all competitions, although it’s fair to say his style of playing is much more suited to the longer formats. Golcar have plenty of batsmen in the ranks who like to clear the ropes, notably Jake Lockwood, Ibrar latif  and Craig Ruscoe so if any one of those hits a groove in the cosy surroundings of Mean Lane then they could quickly take the game away from Honley. Will Hinchliffe is enjoying one of his best seasons yet after suffering from injuries in recent seasons. He has taken 48 wickets so far at an average of 15.83 and will lead the bowling attack supported by medium pacers Ruscoe (14 wickets) and Oliver Pearson (21 wickets). McNamara and Whitwam both offer spin options although they’ll need to be deadly accurate on Meltham’s modestly sized pitch.

The T20 Trophy Final (4pm) and the T20 Shield Final (12pm) is sponsored by Brook Miller Mobility, their first season as sponsor and we’d like to thank them for their support.