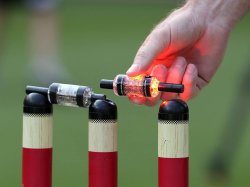 Due to the many cancellations in the T20 Trophy this season (the only results achieved to date have been in Group 3) it has been decided that a result MUST be achieved from all the games scheduled to be played in groups 1,2 and 4 on Tuesday 5th July.

As such, if due to inclement weather no play is possible or result achieved under Rule TT5e) (reduced overs) on Tuesday 5th July, then we are asking the 12 clubs involved from Groups 1,2 and 4 to adhere to the following:

2. If option 1 above is not agreeable to both teams, then the competing teams should agree by mutually consent to play the game on a date prior to the scheduled date of the next round - Quarter final on Tuesday 12th July. If no agreement can be reached this tie MUST be played (weather permitting) on THURSDAY 7th July. If due to inclement weather no play is possible or result achieved under Rule TT5e) (reduced overs), on the date for the rearranged tie, then a result must be achieved on the day by a bowl out or by the toss of a coin.

The home team must send by text, all results or match status to the Match Secretary immediately after the scheduled day's play for each T20 Trophy tie.

For any further clarification please contact Phil Senior on 07713 613833 or via email: phil.senior@davair.co.uk.