The venues & dates for the Scorers Courses have now been confirmed & are as follows:-

This Course is intended for Candidates with little or no knowledge of Scoring. Candidates will look at the standard box scoring method & learn to complete a basic scoresheet. Areas covered include Umpires signals, working with a colleague, standard scoring symbols, how to check and balance a score book. There will be video footage to give candidates the opportunity to score a real match day.

Start 10.00am to 4.30pm with 45 min break for Lunch. Candidates are advised to bring packed Lunch. Tea & Coffee will be provided.

This Course is intended for Candidates with scoring experience (probably at least a season or more) who are looking to improve & expand their scoring knowledge. This will cover everything on the Introductory but include more detail such as timings & balls received. Candidates will learn more about Laws of the Game appertaining to Scorers & we will cover questions on more complex situations in the game. There will be more on working as a team with other Officials & we will score extended games.

The pack consists of the following items:-

All Umpires in the Huddersfield Leagues are welcome as are anyone who may be interested in becoming an Umpire even if they may have not yet finished playing.

Anyone wishing to attend any of the above should contact either of the following no later than Monday 8th February 2016:

The recent ECB Indoor 6 a Side Yorkshire Finals were an excellent success, despite the weather attempting to de-rail the competition!

The results were as follows:

Whitley Hall CC are Yorkshire CB Champions for 2016, and will represent Yorkshire CB against the Lancashire CB winner on Sunday 14th February as part of their journey towards the National Finals to be held at Lord's in March.

Clayton West Cricket Club is under serious threat of closure if Kirklees â€œLocal Planâ€ proposals to build on land running adjacent to the cricket field are approved. We are looking for the support of local people to raise objections to these proposals, allowing the cricket club to continue to exist and provide a much needed recreational and community facility for many people (including lots of children of all ages) in Clayton West and the surrounding area. In the last 2 years alone we have seen junior membership rise from 30 members to more than 100 â€“ itâ€™s vital that we do everything we can to prevent the closure of such an important facility for future generations.

What can you do to help?

There is only one request we ask of you and that is to register an objection on the Kirklees consultation website. This can be found at consult.kirklees.gov.uk/portal/aod

You will need to register (you will see the register/sign-in option at the top of the page) and then after youâ€™ve registered select the following:

We appreciate that people have busy lives and that the process for registering an objection may not appear easy/quick. For anyone who wishes to have further help or support in registering an objection, you can contact someone at the cricket club who would be happy to help further. We will also be opening the cricket club on Friday 22nd January from 5:30pm for anyone to call in, where we will help you with the objection registering process. The closing date for registering objections is 5pm on the 1st February. For further information / updates on this issue, please visit us at Twitter or on our website:

We thank you very much indeed for your support in helping us protect this important local facility that has been in place for more than 100 years. Weâ€™d like to think that our efforts can ensure it can continue for the next 100 years.

The following award winners for Season 2015 have been announced:

Alec Lodge Memorial Award
Presented occasionally to a current or recent junior of the League who has made outstanding progress in any sport.

All trophies will be presented at the Annual Drakes Huddersfield League Dinner on the evening of Friday 13th November.

With the resignation of Paddock CC in April of this year, the League was left with 11 clubs in the Conference and 11 clubs in Championship Two.

Due to this resignation, there are subsequent isues regarding promotion and relegation this season.

Promotion and relegation for second teams to and from Championship Two and Conference Two will be as follows:

The draw for hosting both the Oddfellows and Earnshaw Cup finals has taken place with Cawthorne and Kirkheaton winning the right to host their respective finals. The final draws are as follows:

Due to tomorrow's very poor weather forecast, and in the interest of the organisers, it has been decided to postpone the T20 Finals Day and has been rearranged for SUNDAY 30th AUGUST. The venue and start times will remain the same (see below).

Sunday sees the first finals of our domestic trophies being contested for on T20 Finals Day. Thongsbridge Cricket Club is the venue for both matches in the T20 Shield and T20 Trophy, both to be played in the afternoon.

The schedule of events is as follows:

In addition to the cricket, there will be drinks and refreshments readily available and a BBQ featuring Hinchliffe's Burgers, Sausages, Kebabs and German Bratwurst!

Music during and in-between the matches will also be provided for entertainment and extra car parking is available and will be easily signposted around the ground.

Please check out the Thongsbridge CC website for further details. Finally, may we wish all our finalists the very best of luck and to enjoy the occasion as we hope all spectators will too. Let's hope the weather is kind!

The venues for two of our main competitions; the Twenty20 Finals Day (combining both the T20 Trophy and the T20 Shield) and the Paddock Shield (The premier 2nd XI knockout trophy) were realised this evening. The following venues have been drawn:

Friday 11th December this year sees the annual dinner for the Huddersfield Drakes Cricket League Umpires Association take place at MELTHAM GOLF CLUB. This social event is open to all members of the umpires association and friends or guests are more than welcome. Food comes as a three course meal / carvery (including tea & coffee) with superb entertainment on the night from JONATHAN REDFEARN. The dinner is 7:30 for an 8:00pm start.

Tickets for this event are priced at just Â£20 per person and tables of 6-10 are available. For interest, booking and enquiries please contact Roger Harrison on 01484 844874 or 07842 684948. Roger is available to approach at any umpires meeting.

The draw for the semi-finals of the Sykes Cup (for first teams) and Paddock Shield (for second teams) was made this evening and is as follows:

All fixtures will start at 1:00pm.

Could you please do your best to complete the survey? The links below take you direct to the survey plus an article on the YCB website? The more engagement secured from players the greater the insight on what they are saying about the structure of the recreational game.

Click here to read a letter from the YCB encouraging players to participate in the survey.

The draw for both the Sykes Cup and Paddock Shield quarter final took place this evening and shapes up as follows:

All ties are scheduled to take place on Sunday June 14th with a 1:00pm start time.

Following Sunday's concluding First Round Sykes Cup ties, the draw for the 2nd XI Paddock Shield second round has been made and is as follows:

All fixtures are scheduled to take place on Sunday May 17th.

The draw for the second round of the main cup competition; The Sykes Cup has been made. It is as follows:

The Paddock Shield draw will be made once the first round Sykes Cup matches have taken place.

A note to all clubs who are drawn at home in the First Round of the Paddock Shield. Their usual club umpire will be required to officiate at the match. This is just for Round One. Round Two and later will be covered by league umpires.

With the season now upon us, the new rain rules are in force; an effective way of revising totals to attempt to bring a result after a rain affected match. A rain rule calculator has been developed which automatically calculates a revised number of overs and second innings total after rain halting a match several times. The program can also calculate batting point targets during a second innings too.

The program has been tested using Microsoft Excel and Google Sheets on a variety of devices including Windows laptop, Nexus Tablet, iPhone, Samsung Galaxy and HTC phones.

We recommend and encourage all scorers and captains to download this program on the understanding that the umpires are solely in charge of the decision on time lost and the subsequent calculation of both remaining overs and any revised scores.

The draw has taken place for the Paddock Shield first round following the weekend's preliminary round results. It leaves both the Sykes Cup and Paddock Shield draw looking as follows:

Fixtures are scheduled to be played on Sunday May 3rd with 1:00 pm start.

The latest version of the post-match results spreadsheet has now been added, which takes into account the new points scoring system and the new rain rules. As before, all results sheets need to be completed by the home club and sent to Match Secretary Phil Senior (phil.senior@davair.co.uk) no later than 12pm the day following the match.

Please also be reminded that all home 1st XI clubs must phone Hawksworthâ€™s Sports Agency on 01977 704041 no later than 15 minutes following the end of the match.

Click here for the full rules regarding match results and procedure.

If you're looking to take in some local cricket this weekend, with the season just over a week away, several of our league clubs have friendly matches arranged for both Saturday and Sunday.

All start times are approximate:

All scores, updated tables, player stats, cup draws and more will be tweeted straight away making Twitter your first point of call for the very latest happenings in the Huddersfield League.

All senior captains, vice-captains, scorers and umpires plus junior team managers and coaches must have DBS (formerly CRB) certificates. These certificates must be renewed every 3 years.

Application forms can be obtained from www.onlinedisclosures.co.uk/already-using-online-disclosures/ecb/order-a-pack/

Before a completed application form can be submitted it must be verified and identity checked by an authorised validation officer. Two such officers are Roger Peaker and Phil Senior. They are holding verification sessions as follows:-

A few blank application forms will be available on the night but applicants are recommended to obtain and complete their forms in advance. Any queries should be addressed to League Child Welfare Officer Roger Peaker (01484 667787) who maintains a limited stock of forms.

Terrified of the tinies!

This is a free workshop for coaches and parents focusing on getting young children playing and enjoying cricket. Anyone can feel free to attend.

To book a place email lee@lbcricketcoaching.co.uk 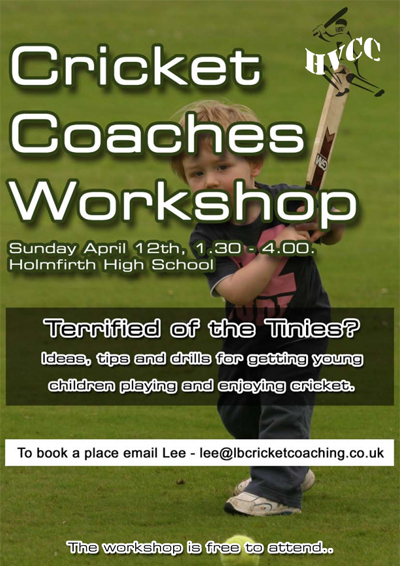 The guest speaker will be Hilary Oliver; County Scorers Officer. All ACO members / Club scorers are urged to attend the meeting at which complimentary Pie & Peas will be served to those who confirm attendance to David Haikings (01484 301252 or david.haikings@ntlworld.com) by Friday 13 March.

Current thinking would argue that the further towards Cricket Game Based Learning the coach can get with every practice the more complete the learning will be for the player. This workshop aims to explore the strengths and weaknesses of all practice types and help coaches identify when and how they can use each in their sessions.

To book a place email boothby105@googlemail.com