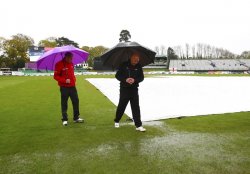 In view of the recent rain and the threat of more bad weather, and to remove the need for any unnecessary travel, the scheduled T20 Trophy games for Tuesday June 14th may be cancelled by the home team if they deem the ground to be unfit for play. However, this may only be done if agreement to do so is given by an official of the away team (either Secretary, Captain or Chairperson.

If agreement can not be given by the away side then players and officials will need to attend as normal.

If there is agreement by both parties, and the game is cancelled prior to the start, the Secretary of the Umpires Association Ron Tindall must be contacted immediately (01484 664002) in order for him to inform the match umpires.

In the event of a game being cancelled, there will be no rearrangement and each team will receive 1 point each as per rule TT2(b).

The T20 Trophy Matches scheduled for tomorrow are:


In view of the recent rain and the threat of more bad weather tomorrow and throughout the week, together with some flexibility in the T20 Shield fixture programme, it has been decided to move all scheduled TICS T20 Shield Prelim Round ties from Tuesday 14th June to Tuesday 21st June.

The Preliminary ties are as follows:

The rest of the ties to be as scheduled.